This is a story of a great love and a powerful connection, one to keep in your heart, always.  It is exquisitely written by my good friend T.J. Banks. It is her story.

The rain that early July Tuesday had been monsoon-like, forcing me to pull over to the side of the road at one point during my travels. By 7:15 p. m., it had stopped, but the roads were still dangerously slick. I’d just gotten off the phone with my husband, Tim, and could tell from his voice that the swing shift he’d worked the night before had finally started catching up with him. “You sound like you need to be off the road,” I’d remarked, telling him to skip the trip to the store he’d been about to make.

“I really want to be home,” he’d said just before signing off.

A funny queasiness took hold of me shortly afterwards. I wandered restlessly about the house, then headed up to our three-year-old son Zeke’s room and began reading to him. I happened to look up at one point and went even sicker inside. The walls of the room began pulsing, the colors in the wallpaper draining away.

A few hours later, my in-laws came to tell me that Tim’s van had crashed into a telephone pole, killing him instantly. The time of death was 7:31. (“I can’t say for sure,” a friend said later when I told her the wallpaper story, “but I’ll bet you that’s when Tim died.”)

Pain set in, followed by an eerie numbness, a winter of the soul like nothing I’d ever known before. I made the funeral arrangements, picked out the monument, gave away many of Tim’s belongings, and probated the will, hoping that once these things were done, I would somehow come back to life. I was a ghost wandering through a lonely dark wood, searching desperately for a clearing, some space between the branches that a ray of light could pierce through.

Two weeks after Tim died, I came back from running some errands and went up to my room to lie down. I couldn’t sleep, so I figured I’d just rest a bit in the cool shadowy room while my mother took care of Zeke downstairs.

Suddenly, out of nowhere, a white-gold light appeared to the left of the headboard. It hung in mid-air, glowing like a flame and deepening in intensity as I gazed into the heart of it. The light flickered and danced before my eyes, then slowly…ever so slowly…faded away.

I sat up, amazed. The room, as I’ve said, was a shadowy one, thanks to the huge oak tree shading the window directly across from the bed: in the past, I’d hung crystals in that window in vain attempts to work a little rainbow magic. There was no prism in the window now, only an enormous aloe plant snaking its arms against the pains…and, anyway, a prism would’ve cast its rainbows against the walls, ceiling, and floor. It wouldn’t have conjured up that firefly flame that hung suspended in the air, beckoning and reassuring me….

The June after Tim died, Zeke and I traveled to Prince Edward Island. It was the vacation that Tim and I had planned for the three of us to take for what would have been our tenth anniversary. It was a tough trip on my own with a four-year-old, and Zeke was homesick. So I cut the vacation short and drove the rental car to Charlottetown the day before our re-scheduled flight. We stopped at the airport first to confirm the flight changes. The woman at the counter was genuinely charming and helpful, waiving the change fee. “Now,” she said brightly, looking up at me, “there’s a third person traveling with you?”

I did a double-take – after all, it was 1996, and surely a single parent traveling alone with a child shouldn’t be that much of a novelty – but explained the circumstances. The woman shivered. “That gives me the willies,” she admitted, as she directed us to a motel close to the airport.

I found it easily enough. The woman who ran it was just as friendly, and we chatted lightly as I filled out the necessary paperwork. “There’s a third person traveling with you?” she asked suddenly.

I guessed there was – an unseen traveler who wanted to make sure that we were all right and had landed in a good place. 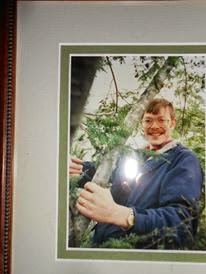 T. J. Banks is the author of A TIME FOR SHADOWS, CATSONG (winner of the 2007 Merial Human-Animal Bond Award), [see CATSONG Amazon link in my left sidebar], DERV & CO., HOUDINI, & SOULEIADO. A Contributing Editor to LAJOIE, she has also worked as a stringer for the Associated Press and an instructor for the Writer’s Digest School, and elsewhere. She has received awards for her fiction & non-fiction from BYLINE, the Cat Writers’ Association, & THE WRITING SELF. Her book, SKETCH PEOPLE: STORIES ALONG THE WAY, is based on her blog of the same name. Both the book and the blog feature “conversations” or interviews with people who have stories worth telling.

Visit T.J. on her “A Time for Shadows” Facebook page or on her blog:- Sketch People.: “We all have stories to tell. SKETCH PEOPLE is a series of interviews with people about what they do — their passions, their purpose, and their adventures along the way. It’s that simple. And that fascinating.”