September 24, 2014 — F. Scott Fitzgerald came to live in Wilmington, Delaware, in March 1927. With him he brought his wife, Zelda, and his little daughter, Scottie. They stayed two years.

The feudal atmosphere in Wilmington under the du Ponts, thought Maxwell Perkins, Fitzgerald’s editor at Scribner’s, would provide the creator of The Great Gatsby with the tranquility he needed to finish his new novel, “The World’s Fair,” and give him material for future work.

For $150 a month, they leased Ellerslie, the white three-story 1842 Greek Revival cupolaed mansion on the Delaware River in Edgemoor. Wilmington attorney John Biggs, Fitzgerald’s former Princeton roommate, found the house for them.

For the first few months, life at Ellerslie floated along on the wings of a dream. Fitzgerald wrote to Ernest Hemingway: “Address for a year – Ellerslie Mansion, Edgemoor, Delaware. Huge old house on the Delaware River. Pillars, etc. I am called ‘Colonel,’ Zelda ‘de old Missus.’”

Scott and Zelda devised a system of calls and echoes so they could find each other among the 14 of the 27 rooms they kept open. Scottie romped the broad green lawn with the Wanamaker and du Pont children. And from the second-story bay window room where Fitzgerald wrote, he could see the lights far across the river. 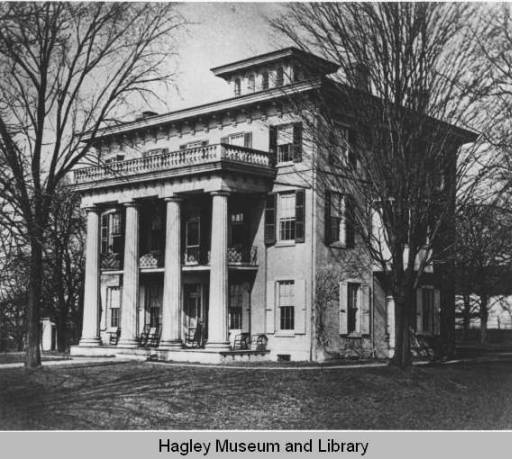 Ellerslie, image from the Hagley Museum and Library

At Ellerslie, in the deep night, amid the whispering old oaks, beeches and horse chestnuts, you might glimpse the suggestion of a figure, perhaps Gatsby himself, standing on the pillared portico of the magnificent house, lifting his arms outstretched toward the dark water.

The invitations went out and the crazy weekends began. Fridays the French chauffeur drove to the Wilmington train station to meet the guests who included Ernest Hemingway, John Dos Passos, Thornton Wilder, Edmund Wilson and Charles MacArthur. The chauffeur drove them back on Sunday. In between were dinner dances, polo matches staged with plow horses and croquet mallets, and late-night bedside visits by the resident ghost. If things got dull, they caroused the town: John Biggs received the middle of the night phone calls to get them out of jail.

At Ellerslie, Fitzgerald had turned 30. Indeed, a weekend guest recalled one of the parties as being a virtual funeral wake for the passing of his 30th year. His sense of loss plagued him.

“There was a demon within him to be the greatest writer of his generation. He didn’t feel he was accomplishing this,” remembered Biggs.

He got distracted when he started writing. “I get afraid I’m doing it instead of living…. Get thinking maybe life is waiting for me in the Japanese gardens at the Ritz or in Atlantic City or on the lower East Side.”

Zelda wanted to build a surprise dollhouse for Scottie. Fitzgerald and his little girl waited in their car on a quiet red-brick street corner while she disappeared with some papers through a door lettered “Cabinet Maker.”

It was a fine November day. The last golden leaves clung to the trees, sprinkling little shadows here and there on the sidewalk. The daddy yawned. A very little boy walked up the street, taking very long strides. He went up to a door, took a piece of chalk out of his pocket and proceeded to write something under the doorbell.

“He’s making magic signs,” the daddy told the little girl. The daddy then wove a tale of fairy intrigue. ‘The little boy was the ogre and he was holding a princess captive behind the closed curtains of the flat on the corner. The king and queen were imprisoned 10,000 miles under the earth.

“And what, Daddy? What?” demanded the little girl, caught up in the magic. The man continued the story. He wanted to be in his little girl’s fairy world with her. A shutter banged closed, then slowly opened. Suddenly the room turned blue. That meant the prince had found the first of the three stones that would free the princess.

The man could remember that world but he knew he would never again see it or touch it for himself. “Outside the Cabinet-Maker’s” was published in The Century Magazine, December 1928.

In March 1929 the Fitzgeralds sailed for Genoa. In April they were somewhere in France. By June they were in Cannes.

After they sailed, Ellerslie was acquired by the Krebs Co.

Tender Is the Night, begun in 1925 as “The World’s Fair,” winged its way into the literary world in 1934. One year later, the big square rooms of the sweeping white mansion on the Delaware housed the offices of the DuPont Co. pigments plant.

On December 21, 1940, Francis Scott Key Fitzgerald, lyrical prose writer, author of novels, short stories, poems, essays and plays, died in Hollywood, Los Angeles, California, of a heart attack. He was 44. In 1972, the gracious summer home on the Delaware, riddled with termites, was demolished.

Away! away! for I will fly to thee,
Not charioted by Bacchus and his pards,
But on the viewless wings of Poesy,
Though the dull brain perplexes and retards
Already with thee! tender is the night

—from Ode to a Nightingale, John Keats

This Ode to Fitzgerald is excerpted from a piece I published in the Wilmington (Del.) News-Journal, “Only the Memories Remain,” under my byline Carol Child,
April 24, 1986.