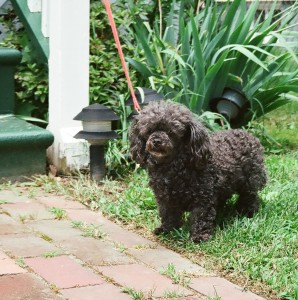 Jetta is gone. We put her to sleep at 2:30 Monday afternoon, December 5. Our little blue teacup poodle apparently had a brain tumor and in her last days could no longer stand. Her legs were weak and she’d just flop over on her left side and lie there. Sometimes she’d do a little somersault coming to rest on left side. She always slept with Emma. She’d get stuck in a place on Emma’s hospital bed, had not the strength in her limp legs to get out; so she’d bark for me and I’d come readjust her. In her last month she lost weight. In her last four days, I had to hold her in my arms, feed her from my hand or her bowl, and offer her water from a small, flat measuring cup. She had pain. She would shake her head as if to get the cobwebs out. Sometimes she’d yelp or cry. Her vet prescribed prednisone which alleviated the pain. Even so, she hadn’t lost her feistiness – she still barked at the mailman, at a passerby on the sidewalk, when a familiar car – usually belonging to one of our aides – pulled up out front, and at the word “cat.”

She made friends, though, with Bootsie, the tuxedo cat who lived next door and towered over her. She tried to chase him, but he would just roll over, curl slightly and smile up at her with his big, pale green eyes and flowing white whiskers.

A kind, sympathetic veterinarian came Monday afternoon with her assistant. We laid Jetta on her side on some pads in the middle of the kitchen floor; I stroked her and told her it was all right, while the vet released her from her suffering. She will be cremated; her ashes will travel across the universe. She was 11.

My brother buried his chocolate point Siamese cat that lived to be 18, in the back of his property. That night he dreamed he had buried the Pink Panther.

I timed the vet’s visit to just before our Hospice nurse, Tess, was to arrive, knowing Tess is so compassionate and I would have support in my loss.

Later, our Hospice chaplain called me and our Hospice bereavement counselor, Geri, to say how sorry they were to hear the sad news. Friends and my daughter and granddaughters expressed their condolences, too. So, I’ve had lots of support, thankfully.

Jetta was Emma’s dog. Emma had just gotten her when I arrived in Delaware seeing that Emma needed help and realized I had to stay. Jetta was a puppy. One night, at 11 p.m., something happened: her gums and tongue turned white and she became limp. We got in the car and I rushed her to an emergency veterinary clinic across town, with Emma holding her on her lap. The vet didn’t know what caused the reaction, but prescribed medication and Jetta pulled through. We saved her life.

While Emma’s dementia gradually has taken its toll over the years, I have kept her surroundings much the same, so that she would know she was in a familiar place, home, and with all her belongings around her. That nothing has changed has made the past 11 years seem like a day. It’s hard to believe that so much time has passed and Jetta was born, was a puppy, got old, got ill, and is gone.

Our Victorian house is very quiet without her. There’s an emptiness. When I go to check on Emma sleeping in her bed, there is a stillness. Jetta always came alert, moved, made sounds, greeted me. Jetta watched over her master, Emma; she protected her always, and indicated to me when there was a change in Emma’s condition or about to be, such as the times she would bark, I’d come and she’d say, “Umm … Samantha? Ya gotta see this….” Even in her last days, she was ever watchful of Emma.

“She even became a CNA,” said our certified nursing assistant, tears welling in her eyes.

Jetta not only took care of Emma, but she took care of the house when we were out and had to stay home alone.

Jetta wrote an email to our friend R one time. R said it looked like Turkish. I had to translate. (I moved my fingers over one key from home position on the keyboard to enable Jetta to type her message.)

All the while I had been considering what I would do when Emma left us: Would Jetta sleep with me? How could I make her understand that Emma would not be coming home? How would I fill that void in Jetta’s life? It is a blessing, therefore, that Jetta went first. None of us expected that. Often Emma would reach over and stroke Jetta. I haven’t noticed her looking for Jetta; I don’t know if she misses her presence. I have asked our aides to watch for that.

Jetta was a sweet, loving, loyal little girl, smart and feisty. “She’s a sensible little dog,” said Emma. Well, maybe too sensible: “Fetch the socks,” I would tell her when I was dressing Emma. She’d look at them, and then look at me as if to say, “Why should I get them? They’re right there. You can reach them.” Always receiving morsels of people food with her dinner, she thought the meals I cooked were exquisite, as I understand it. She’d eat, then come to my chair at the dinner table and thank me effusively – or was she asking for more? And now I have to vacuum the kitchen floor after meals myself.

On her last day, I gave her chicken and vegetables to eat (chicken and fish were her favorites). I laid her on Emma’s bed and moved Emma’s hand from under the covers to stroke her. Then I took her outside where we sat on the front porch in the sun. She sniffed at all the things in her surroundings. I said, “Maybe there’s a kitty cat.” She barked, just on general principles, I think.

My friend who is a Tibetan Buddhist Rinpoche, told me he would place Jetta in his daily practice. He said may she find human form in her next life. She was pretty close to it in this life, it seemed to me. My friend R said that if she does find human form, she will certainly wish to be taller.