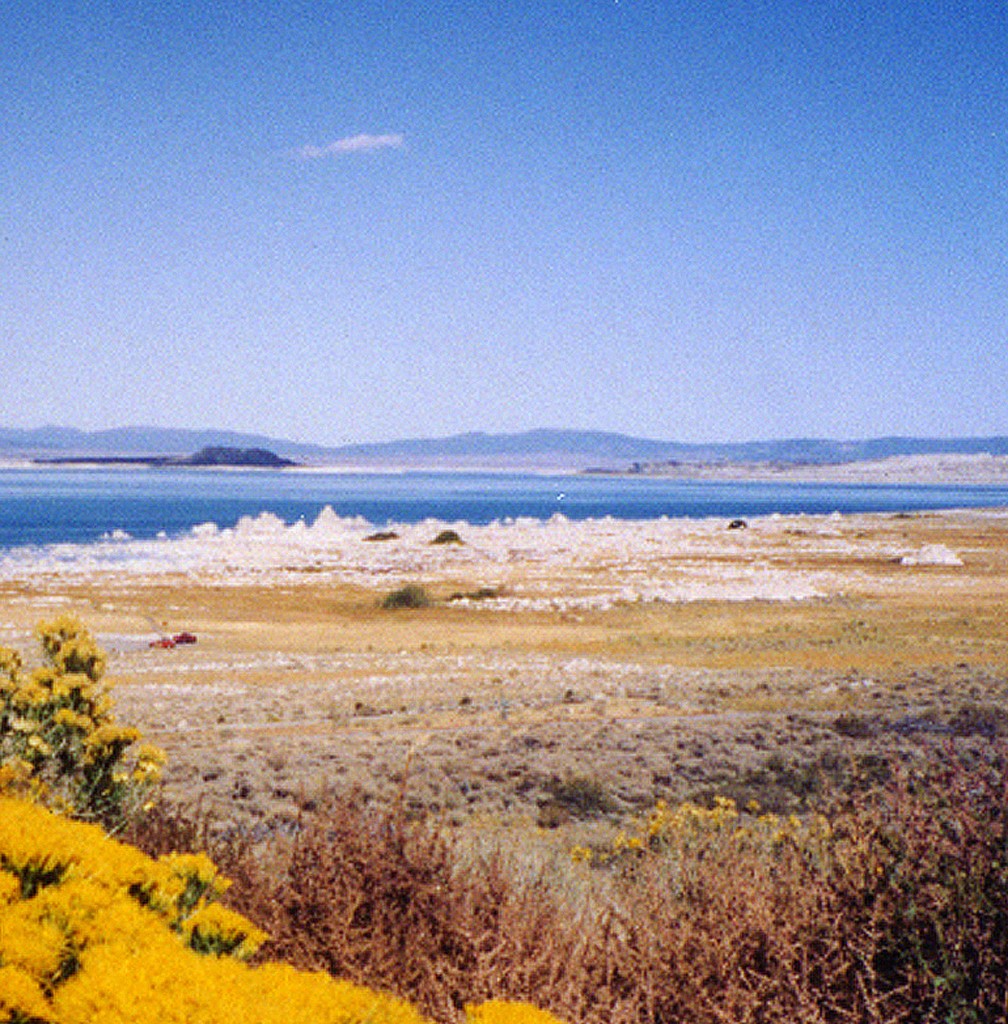 Mono Lake (pronounced moh-noh) is a salt lake located in central California close to the Nevada state line and near Yosemite National Park. The lake is one of the oldest lakes in North America, formed at least 760,000 years ago if not 1-3 million years ago. The surface area covers 65 square miles. The lake is three times saltier than the ocean.

Mono Lake has no outlet; therefore, the mineral content of the fresh water from the streams that feed the lake becomes salty. The tufa towers form beneath the lake when underwater springs mix with the lake waters. They are composed of calcium carbonate limestone. 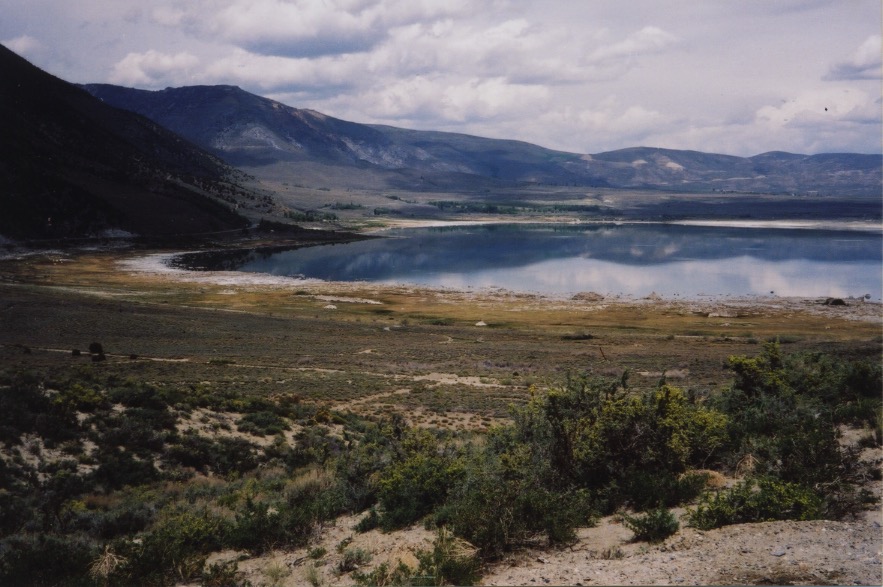 In 1941 the City of Los Angeles began diverting water from these streams. Over the years the lake level dropped 45 feet, exposing the tufa towers. By 1982 the lake had lost 31 percent of its surface area. It was in peril of becoming a salt flat.

When Los Angeles diverted water from the lake, the lower lake water levels threatened the ecosystem imperiling the two million migratory birds who nest in the area and who feed on the brine shrimp and black flies (that also feed on the shrimp) in the lake. The black, brine flies that thickly ring the lake have no interest in humans, only in the shrimp. There are no fish in the lake.

The mineral content of the lake contains chlorides, carbonates and sulfates, similar to the content of your laundry detergent, high alkaline, a pH of 10. It is said you can dip your laundry into the lake and it will come out clean. The average depth of the lake is 56 feet but can rise to around 158 feet. The water level is notably variable, especially as measured by the height of the exposed tufa towers. In these photos of mine you can see the two major islands in the center of the lake — Paoha, the larger, and Negit, the smaller. The formation of the area is of tectonic and volcanic origin. 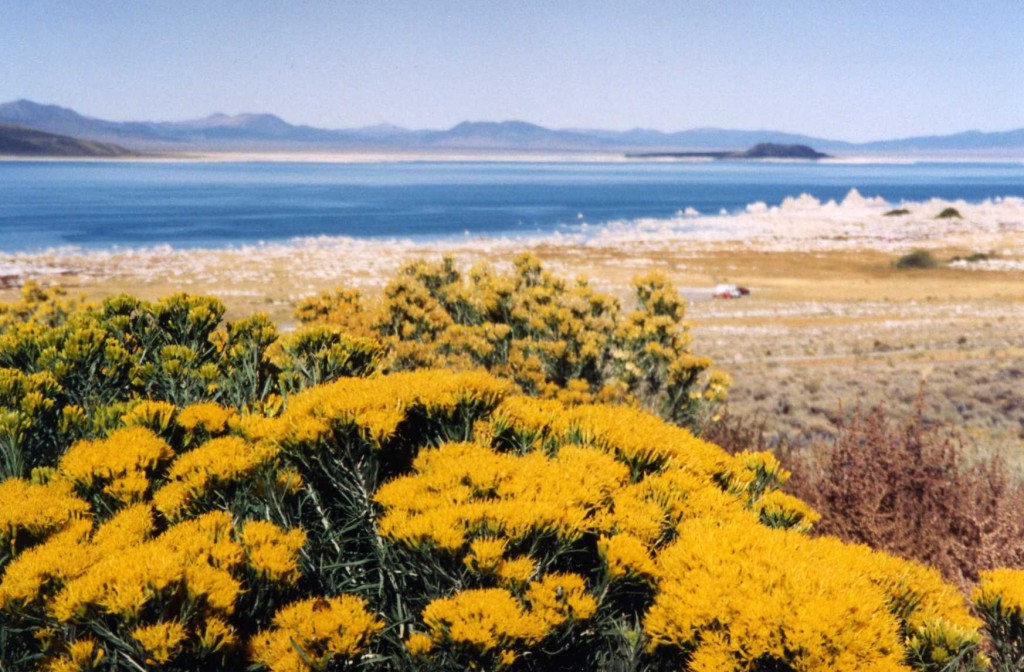 To protect the lake and its ecosystem, the Mono Lake Committee, a nonprofit, was formed in 1978 and through litigation, legislation, cooperation and public support the committee has been able to protect the lake from excessive water diversions to Los Angeles. The city has found alternate water sources, thereby drastically reducing the amount of water taken from the tributary streams. Consequently, the water level in the lake has risen from the lowest level of 6,372 feet above sea level (asl) in 1982 to 6,378 feet asl in 2015. Before diversion in 1941 the water level was at 6,417 feet asl. It is expected to take 20 years for Mono Lake to reach the stabilization level of 6,392 feet. At the stabilization level, the lake will be two times saltier than the ocean.

My photos of Mono Lake are not nearly as dramatic as many that are out there. For example, here is one, with no photo credit, I got from the Internet: 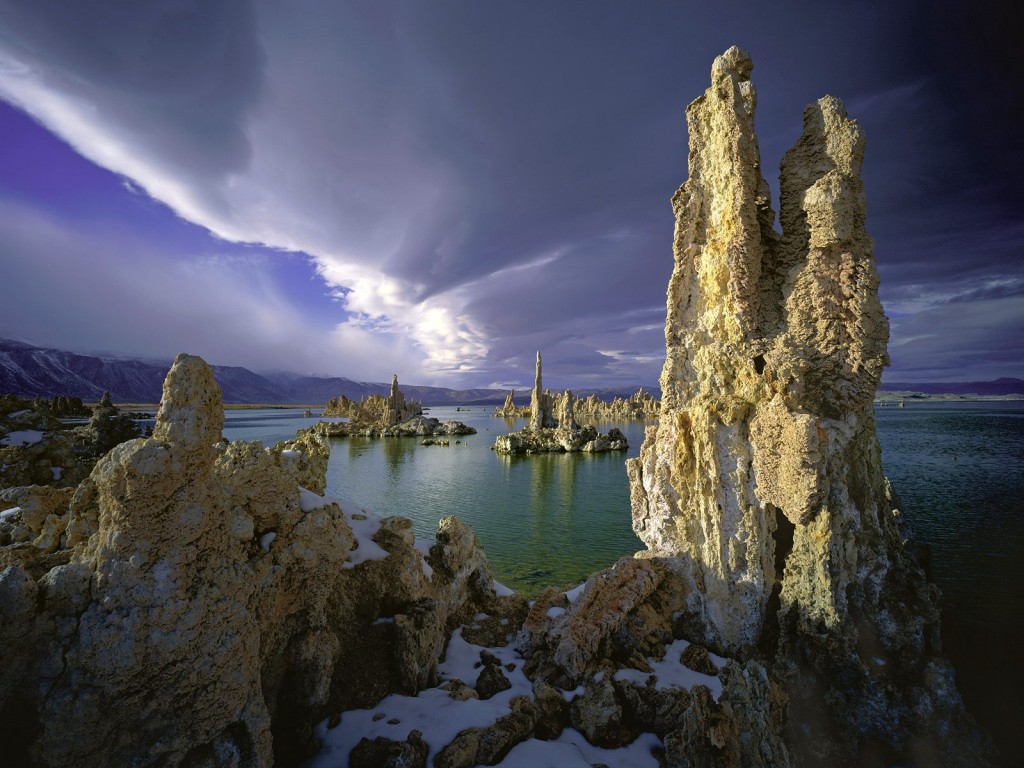 Here’s a link to an informative, short blog, with photos of Mono Lake and stills and story of High Plains Drifter: https://markosun.wordpress.com/2013/02/12/that-mysterious-lake-in-the-clint-eastwood-movie-high-plains-drifter/.

To film High Plains Drifter, the filmmakers built the town of Lago, the town the stranger painted red, on the Mono Lake shore and then dismantled it after they finished filming. Here is an 8:34 minute video taking you step by step through where the movie was filmed: “The Return to Lago: The Great Silence”. You only have to watch the first few minutes of the video to get an idea of the alien landscape that Clint Eastwood meticulously selected for the film site.

You can view a stunning slide show of the lake in all seasons at Mono Lake Committee images.

Here are some additional links, if you’re interested, with more detail and dramatic photos of the lake.