October 6, 2012 — Moriarty, The Phantom of My Blog, is so allergic to cats that he nearly blew the fur off one, sneezing. The cat was not pleased. Recently, my friend Gwynn Rogers, out in the Seattle area, whose beloved tuxedo cat, Domino, after living with her many years, finally acquiesced and went off to tuna heaven, emailed me a funny story about a cat. I asked her to send me the formal version so I could publish it on my blog. Moriarty, muttering under his breath, has been tidying up all day creating space for it. Here it is: 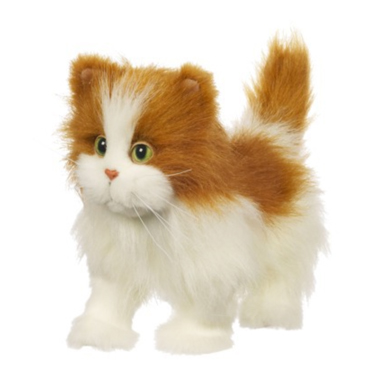 Sienna, my granddaughter, from the time she was born had tried to be friends with our old kitty, Domino.  Domino’s life was pretty quiet and staid; and that was JUST the way he liked it.  However, my granddaughter, being a mini-tornado, tried her hardest to get Domino to like her – with no success.  I simply explained that Domino was a “cranky” kitty, as I needed Sienna to stay away from Domino to prevent his hissing at her.

One day prior to Sienna’s third birthday, she announced out of the blue, that she wanted two “nice kitties” for her birthday, and that Grandma was going to give her a nice kitty.  The problem is that Heather, Sienna’s mother, my daughter, is severely allergic to cats.

So as we struggled with what to do for Sienna for her birthday, Heather called to say that in Toys R’ Us she had found Lulu, The FurReal Kitty.  Sienna would LOVE her.  Ahhhh, the answer to my prayers.

However, my local store did not have Lulu so I ordered her from an on-line site.  The reviews said, “this kitty is exceptionally ‘life-like’ and can even fool real cats” so I eagerly awaited the day for her arrival.

The big day came when Lulu arrived, shipped via UPS.  Of course I had to check out this supposedly life-like cat so I opened the box and there perched on a pillow was a big, life-sized, white and tan cat that slowly blinked her beautiful brown eyes as if inspecting me as I surveyed her.  She gave me the OKAY sign by lifting her paw, purring, and then meowing as she turned over for me to rub her tummy.

I was about to learn that every time I turned the bedroom light on and off or whenever I moved the box where Lulu resided, that Lulu would go through her routine of blinking her eyes, lifting her paw, purring, and meowing as she turned over for a tummy rub.

Interestingly, Lulu got tired of waiting to be presented to my granddaughter, Sienna, so she would periodically, let out a loud, “MEOW!”  I assumed that eventually Lulu would be quiet when I wrapped her box, but even after I wrapped her box she clearly would say “LET ME OUT OF HERE!”

Finally, the big day came for me to take Lulu, the “nice” kitty to Sienna.  But the problem I had is that since Sienna’s birthday is in December, we had been having horrific storms around the day of her party, and true to form another storm was scheduled.  Since I couldn’t get to Sienna’s birthday party, I decided to meet a friend, who lives near my daughter’s house, for lunch.  I would deliver the kitty to my friend, who would deliver it to Sienna for her birthday.

I put the gift wrapped large, kitty-sized box in a huge gift bag to make carrying the box on the ferry easier. On the drive to the ferry, Lulu frantically “MEOWED” as if she knew she was getting closer to her destination and a little girl who would love her.

My plan was to park my car at the ferry landing and walk aboard the ferry.  As I walked toward the ferry, Lulu seemed to become even more frantic and she alternately “purred” and then “meowed,” as if she truly was real.  I assumed that when I stopped walking that with the lack of motion that Lulu would cease to complain.

Shortly after I reached the ferry landing to await the arrival of the ferry, two burly construction workers arrived to also wait for the ferry.  The men stood at the opposite end of the landing conversing with one another.  Then, as we waited, Lulu would periodically, plaintively, and loudly voice her exasperation with being boxed up.  I just stood there trying to pretend that I hadn’t heard anything.

Eventually, the men stopped conversing and eyed me and my wrapped “MEOWING” box. One man turned to me and said, “Lady, do I hear a cat? Do you have a cat in that box?”   I think he noticed that there were no air holes in the box either!

I began to panic as I envisioned these men turning me over to the ferry security for cruelty to animals, so I blurted out “It’s a FurReal Kitty, named Lulu, for my granddaughter’s birthday so that she will have a “nice” kitty to play with as her mother is allergic to cats!”

These men stared at me, and then burst out laughing.  By the time the ferry arrived and we could walk on board these big, burly men were in a state of the giggles listening to my unhappy kitty.

When I reached my friend, Lulu was strangely quiet.  Maybe she needed a nap while we lunched.  However, when my friend put Lulu in her car to run some errands prior to dropping the gift off at my daughter’s house, Lulu consistently and loudly “MEOWED” the entire time. When my friend arrived at Heather’s home she thrust Lulu at my daughter and quickly left.

Amazingly, my friend is still my friend and Sienna is happy with her “exceptionally life-like” kitty, FurReal Lulu. However, I did notice that the battery seems to be missing.

Gwynn writes her own blog, “Gwynn’s Grit and Grin,” telling stories about her own life,  often funny, sometimes deeply serious, and always poignant. I recommend you visit her. I think you’ll like her as much as I do.

Here is the link to Lulu, the FurReal Kitty presently available at Target stores — I don’t know for how long, though, because not many remain available anywhere:  http://www.target.com/p/furreal-friends-lulu-s-walkin-kitty-white-and-orange/-/A-11933990