I thought I’d let myself off the blog-writing-consistency hook by publishing this essay I wrote a few years ago. In the meantime, from a recent conversation I had with Moriarty, the Phantom of My Blog, I am in the midst of composing a multi-part story to post, but have otherwise been most unpleasantly occupied with pressing urgencies of a personal nature. 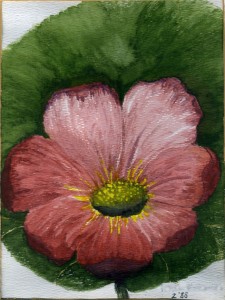 When I wrote the above paragraph, I had not yet heard the despairing news: Our beloved Hospice nurse, Tess, who took such good care of Emma and who has been there always for me, is seriously ill, for a long haul, and we are praying she pulls through. Please say a prayer for her. I would like to repeat here a prayer my writer friend Susan Scott – who is in her own healing process after a horrific auto accident – offered. The candle I lit for Susan’s quick recovery from surgery yesterday, when I heard the sad news became the candle I lit for Tess, also. “Please Lord, be with this kind woman who has been a source of strength to Samantha and her family when Samantha’s mother was in her death throes. Let her know that she is loved and cared for by us and by You. Please help her be strong and well.”

February 19, 2009 — During the early hours of the morning, just after I arise, I always have ideas for my novels. My ideas play out in scenes upon the movie screen of my mind, a fine, wide, smooth movie screen. And then come the interruptions – flossing my teeth; washing my face and applying lotion; Jetta, our teacup poodle, and I going for a walk; making my bed; making coffee; getting Mother, 94, dressed (I am her caregiver), making her breakfast; and so on, like scattershot, riddling the screen of my mind with holes, the punctured scenes never making it to the page.

The mailman is coming now to take Jeremy Irons away. I watched Jeremy, with Helen Mirren, another of my favorites, in Elizabeth I, the two-part HBO production. For 25 years I have loved Jeremy Irons’s performances, especially in the 1981 Granada Television Brideshead Revisited series, aired on PBS, where I first saw him; the 25th Anniversary edition DVD topped my wish list at Amazon until I bought it.

I say this about Jeremy Irons because as I was writing about all my morning interruptions, he came into my mind – the feeling, in his expressive eyes in his powerful acting that appears as non-acting. Anyway, that feeling, that emotion and those scenes of Jeremy Irons are what play across my mind now. It’s a dark emotion, very powerful, intense, a sense of loss, I think, and going on, of not knowing the future until it has happened and is played back upon the fields of history. Where is my meaning for my life? My intent is shot full of holes. It’s war.

Here I think of a friend and how we think alike – our organization methods, our bartering. “I grew up poor,” he said, “so I’m a wheeler-dealer.” Looking back, as an adult I have had little money and starting when I did hair, bartered – cut hair and did perms for massage, dance lessons, and such: time for time, talent for talent. Beware of bartering, some say. I think those naysayers speak from greed or from an ignorance of positive bartering. Life is about an exchange of information and ideas. That’s the correct method of bartering. Exchanging things you can do is a form of this. One person has knowledge of this; the other has knowledge of that. Each learns from the other, each helps the other, gives to the other, thereby exchanging information and ideas, via questioning and exchanging expertise. It’s a dialog; the drama of the endless cycle of life: turning the field, planting seeds, reaping the harvest.

This concept recalls Adam Gopnik, writer and New Yorker essayist, and his good friend, art historian Kirk Varnedoe, who died of cancer in 2004, who both spoke of the importance of giving meaning to one’s life: Having an intention and a goal, and a timeframe in which to fulfill that intention: this is a means of applying one’s talents to benefit others, and thereby expanding upon that foundation of knowledge and talent and watching it grow to elevate the consciousness and intelligence of society and mankind. St. Andrew’s School, the boarding school Kirk Varnedoe attended, the Middletown, Del., setting for the 1989 movie Dead Poets Society, and about which I have published feature stories, teaches this. Through such conscientious planting of thought, soon smiles bloom in a garden of faces.

That’s my little ecosystem for today.