CX. To What Green Altar

June 16, 2013 — I have published my new book, To What Green Altar: A Dementia Caregiver’s Journal, Volume II, by Samantha Mozart. It is available at Amazon in paperback, soon in e-book format for Kindle and Smashwords.com. 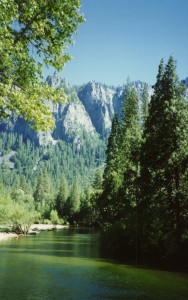 To What Green Altar:
A Dementia Caregiver’s Journal,
Volume II

I took my title from a line in John Keats’s poem “Ode on a Grecian Urn,” as you probably know, recalled by my inspirational encounter with the Merced River in Yosemite Valley. I immortalized that scene with my photo now on my book cover. Viewing that day, more than 20 years ago, I stand on a low footbridge across the green Merced. Incense cedars flank the river, forming an aisle to the bell-shaped shoulders of Half Dome, sculpted by the glacier so flawlessly 10,000 years before. Half Dome’s granite face stands sentinel at the far end, the apse in the cathedral of the Valley.

When Romantic poet John Keats encountered the Grecian urn, that sylvan historian, that foster child of silence and slow time, he wondered at the carved pattern and the stories immortalized thereon – the paradox of human passions frozen in time, immortality set against impermanence: Who are these brought to the sacrifice and why? What sweet silent tune do the pipers pipe? What are the yearnings of these young lovers? All human passion suspended; all remaining forever young, like Keats himself, who succumbed to tuberculosis at 25.

In that year, 1819, that Keats composed his odes he was making an effort to discuss the relationships among the soul, eternity, nature, and art, using classical Greek art as a metaphor.

Keats was inspired by more than one Grecian urn. He traced an engraving of the Sosibios Vase, though, a Neo-Attic marble volute krater, signed by Sosibios. Sosibios is believed to be one among Athenian sculptors working in Rome around 50 B.C., at the end of the Republic, during an era when Greek sculpture was popular among the Romans. This is Keats’s tracing: 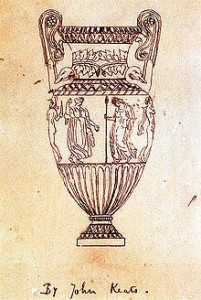 This is a photo of the same Sosibios urn: 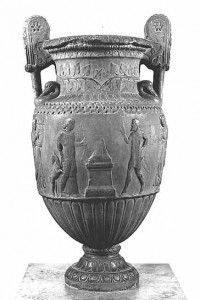 According to the Louvre description (http://www.louvre.fr/en/oeuvre-notices/volute-krater), this vase was once part of the royal collection belonging to Louis XIV, the Sun King, and in whose court classical ballet originated. This urn entered the Louvre in 1797 as confiscated property under the Revolution. It is a marble adaptation of a metal vessel.

This is Louis Quatorze: 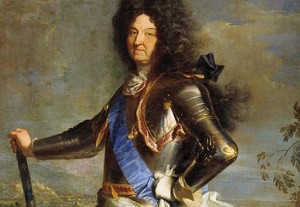 Wow. Love his hair and outfit.

Krater is a Greek term defining a vessel used for mixing. Kraters come in several shapes – column, calyx, volute, bell. Some had holes in them, as does this Sosibios urn Keats chose to trace, and were used for fountains or for pouring a liquid. At symposiums the Greeks used kraters for mixing water with wine. In fact, the word symposium is derived from the early Greek sumposion, from sun, “together” + potes, “drinker,” meaning to drink together or, at the least, a convivial discussion.

Speaking of conviviality, Moriarty, the Phantom of My Blog, is away currently. He told me he wanted to attend a summer symposiarch seminar up in the Pocono mountains where he would learn to mix wine with water at our blog round table affairs. I told him why bother, why learn to sully the pure character of the wine; nonetheless, he insisted on going, if for no other reason, he said, than to sacrifice himself to the pure mountain greenery.

At Greek symposiums the symposiarch had overall charge, responsible for the ratios of mixing the wine to water suitable to the occasion – 1:3, 1:2, 1:1 – and for overseeing its serving. Drinking wine straight was frowned upon; one who did so was considered a drunkard. —Oh, I don’t know….

The patterns carved on the urn result from the vision of the sculptor; they are illusory scenes: pictures of a life created by the mind of the sculptor. Just so, we sculpt our own lives parallel to our dreams, how we think about phenomena. Therefore, to meet our dreams, we seek opportunities for positive change, our visions hanging suspended until such opportunity arises. But the talent is to recognize the opportunity when it appears before us. We have to keep the door of our minds open. OK, well maybe a screen door to keep out the flies…. Alas, our personal patterns, frozen in time, sculpted by old programming, old emotional experiences, old hurts, exist in the present as mere illusion. The past mixing with the present like water sullying the wine can cause us, inebriated on illusion, to stumble right past that open door and miss our opportunity. This is tragic. 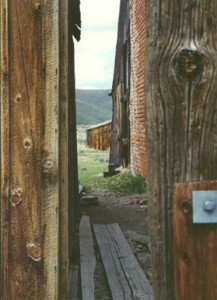 All of these thoughts filled my mind in Emma’s last days – the relationships among the soul, eternity, nature, and art, the choices I must make thereby. The context of my book, To What Green Altar, encompasses my relationship with Emma at the end of her life, as the Grecian urn encompasses the story of human relationships at the end of the life of the Roman Republic: Where is the music, where are the lost loves, the old friendships, what and for what is this life sacrifice? Is this a sacrifice?

What is the altar? Who or what is the mysterious priest? Why is the altar sylvan green? The answer is pure as white marble in its simplicity: “‘Truth is beauty, beauty truth’ –that is all ye know on earth, and all ye need to know.”