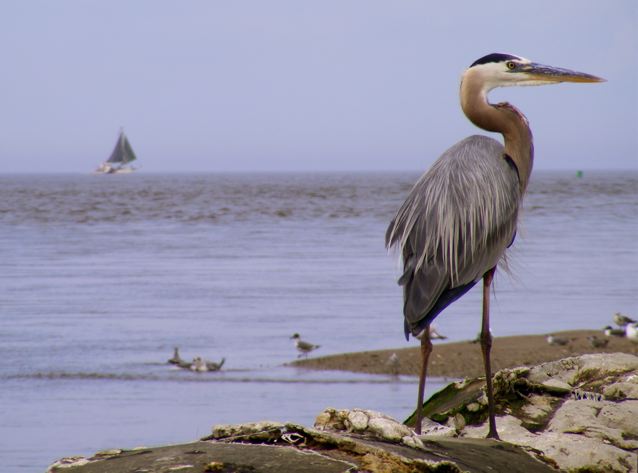 Here She Comes
The Maggie at the End of the Workday 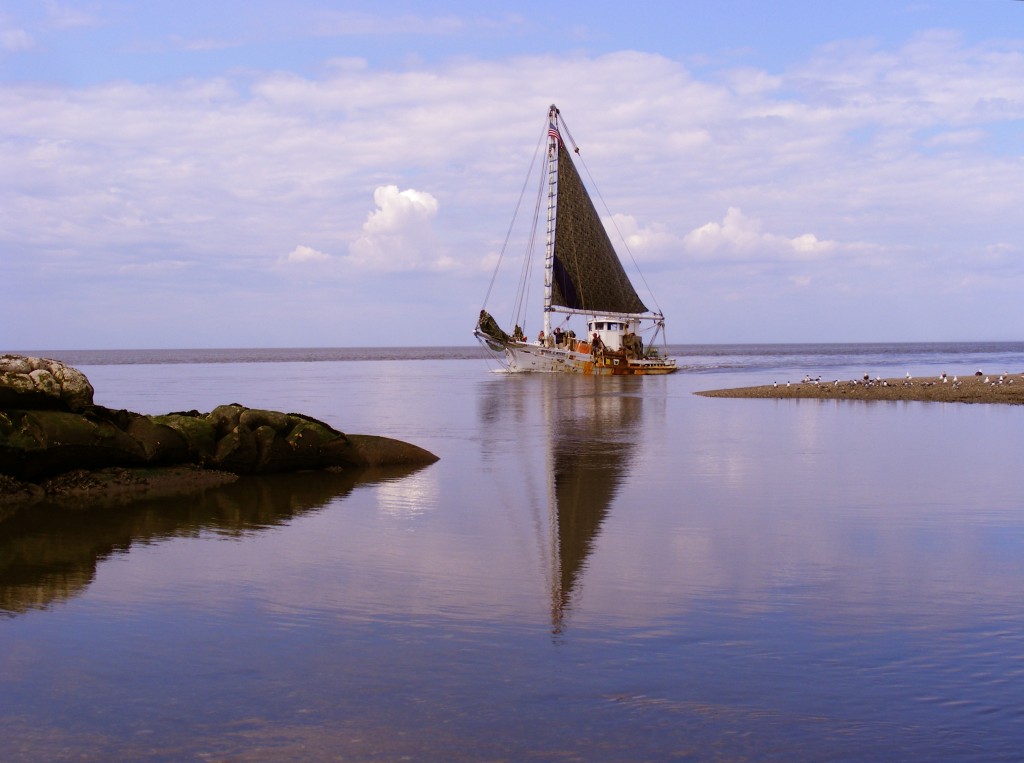 The Maggie S. Myers Coming Through the Cut from the Delaware Bay to the Murderkill River Where She Is Berthed.

July 7, 2012 — I spent the evening of July Fourth out on my friends’ 119-year-old oyster schooner, the Maggie S. Myers, under sail on the Delaware Bay off Bowers Beach, Del., eating, listening to acoustic guitar music and watching the fireworks along the coast. 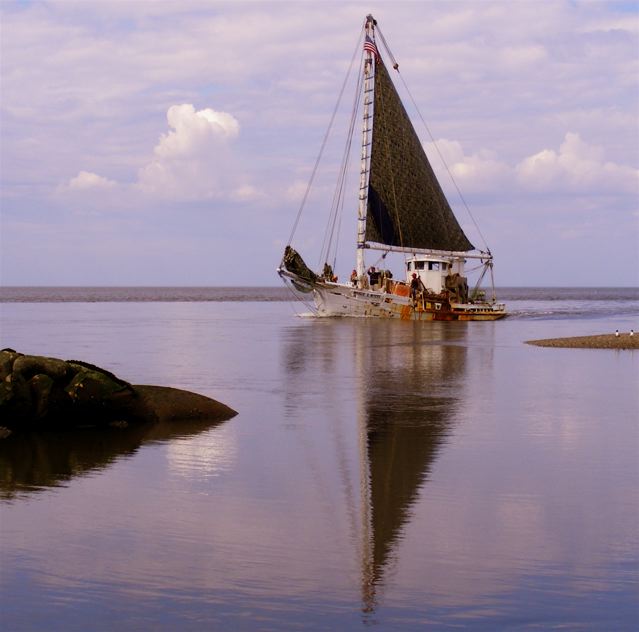 Our friends Jean Friend and Frank “Thumper” Eicherly IV, who own the Maggie, invite a group of us out each year to enjoy the camaraderie and celebrate our nation’s independence. Last year someone on shore ended the evening by setting off Chinese lanterns, hundreds of them, that floated in the dark over the bay like spirit flames. 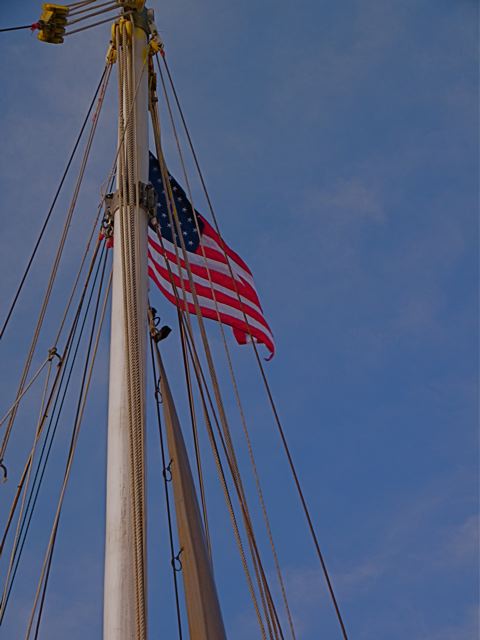 My friend Robert Price, http://www.etsy.com/shop/assemblage333 shot these photos of our event this year. With his camera he created a beautiful documentation of the night. 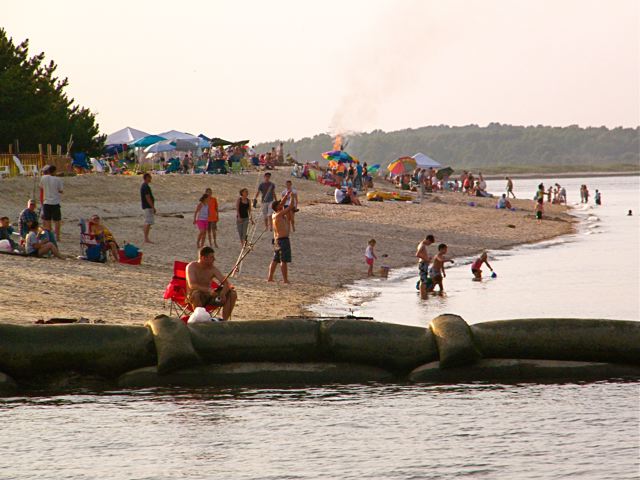 Anticipation of the Show

Jean and Thumper bought the Maggie fourteen years ago, rescuing her when her former owner was about to beach her, and since have sunk tens of thousands of dollars into her each year, maintaining her and lovingly restoring her, in 2004 restoring one of her masts. 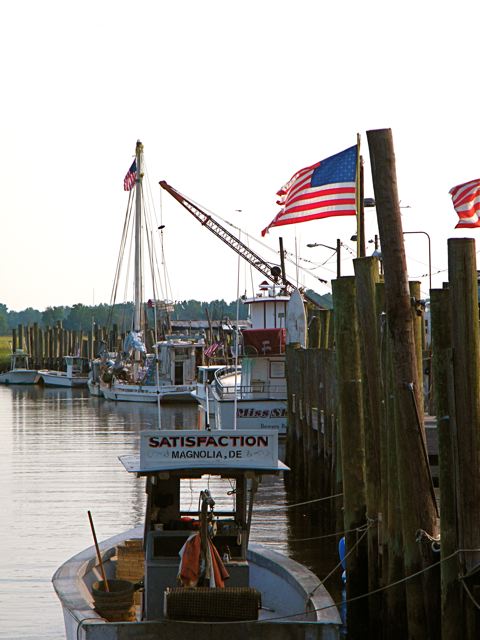 The Maggie S. Myers was built as a two-masted Delaware Bay oyster-dredge schooner in Bridgeton, N.J., and commissioned in 1893. She is 50 feet long and 18 feet wide. The 24.62 ton schooner can carry her weight in oysters. She is listed on the National Historic Register. 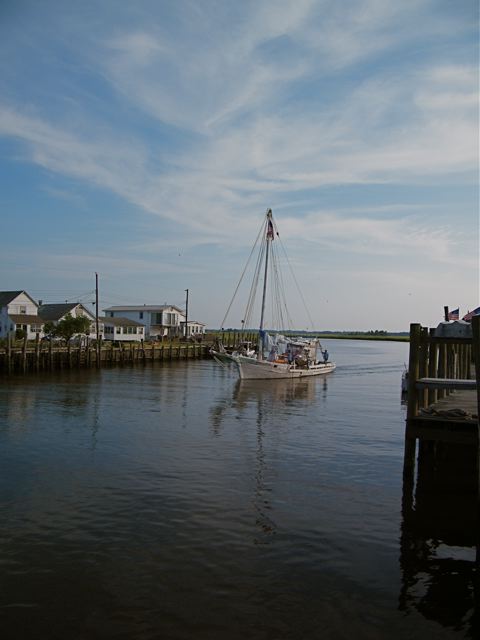 The Maggie has never been out of commission. Thumper and crew work her nearly daily on the bay dredging for conch, blue crabs and oysters. She is believed to be the oldest, continuously-working oyster schooner under sail in the United States. She is living history. 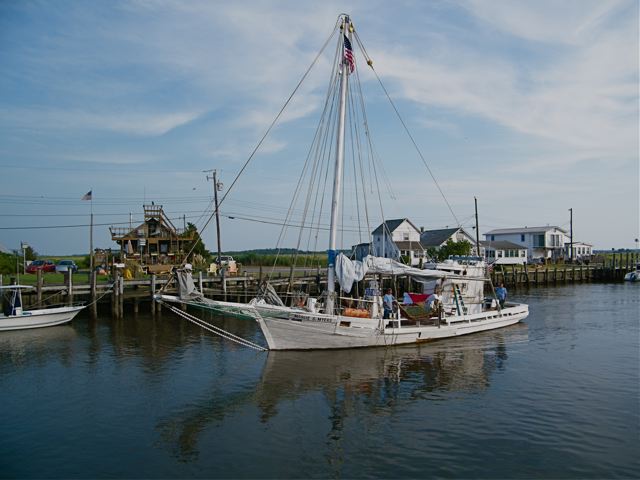 “She’s low to the water and dredges by hand,” Thumper rhapsodizes. “She turns on a song, like a snow goose flying around in the air.” I can tell you his claim is true; I piloted her briefly up the serpentine Cohansey River in New Jersey that early morning in 2004 on the way to the boatyard to restore her mast. 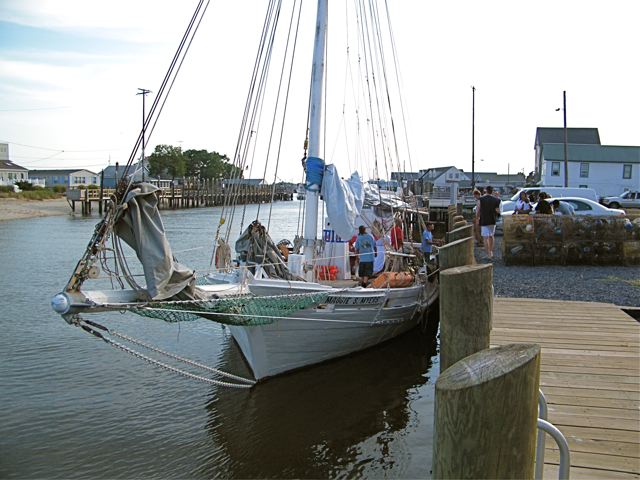 At Dock Ready for Boarding

This July Fourth night it was hot out on the boat, but far more pleasant on the water than on land, with a light breeze, the water like glass. A guy with a house on the beach, and apparently money to burn, buys and shoots off fireworks every year. They go on for over an hour. Simultaneously, someone nearby again this year set off Chinese lanterns. The fireworks go on longer than displays in local cities. They are beautiful, too. Deep blues and golds and some purple along with the standard colors. People build big bonfires all along the beach. Someone on shore set off a couple of red rocket type fireworks that sailed right over the boat — over, thankfully. We were getting ready to jump. Awestruck on seeing them, I stepped back from the gunwale, stood between Jean and Thumper and said, “‘The rockets’ red glare’ springs to mind.” 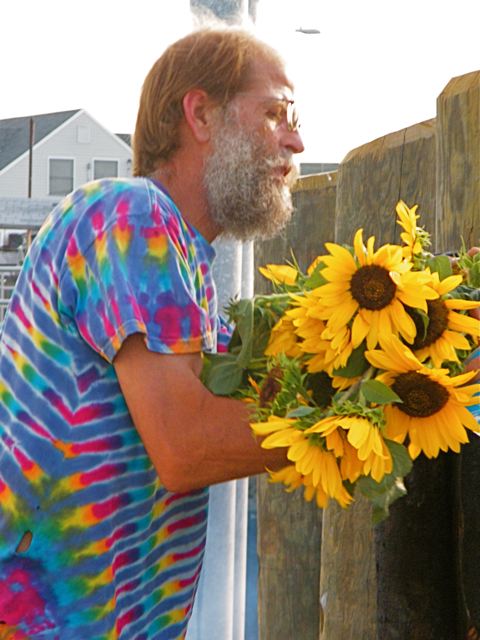 We had been out on the water in the dark for a couple of hours, when a swimmer was spotted swimming the distance from shore to the boat. “Did we forget someone?” asked Jean. 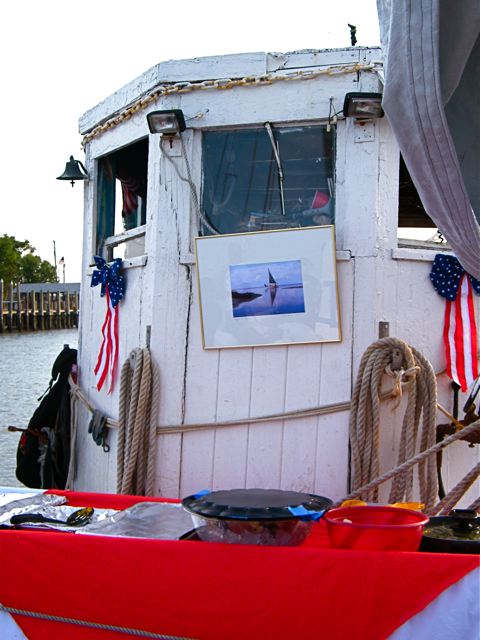 “Throw me the ring!” he yelled. He was yet about 25 feet from the boat. 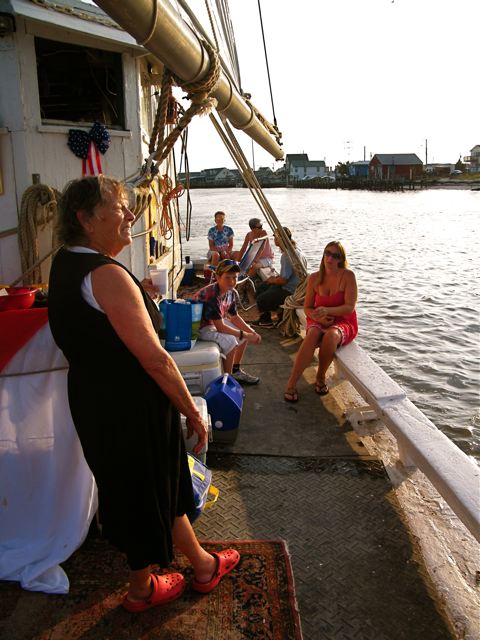 Sailing into the Sun 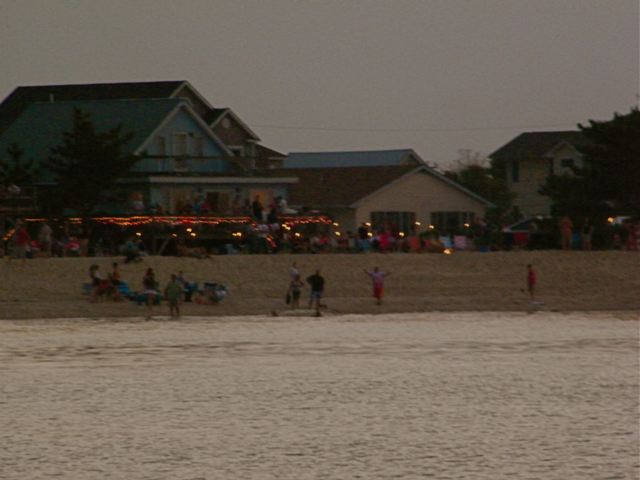 Thumper tossed out the life preserver. The crew hauled the swimmer aboard. He was J.T., another crewmember. He had hurt himself somehow and was in pain. 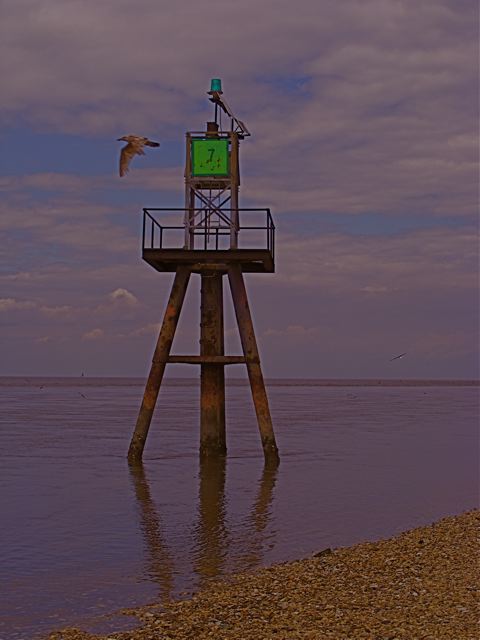 Marker 7
At the Mouth of the Murderkill

He ate, said “See ya later,” then jumped back overboard and swam to shore wearing a life jacket — hard to swim that way, but at least he wouldn’t tire and drown. 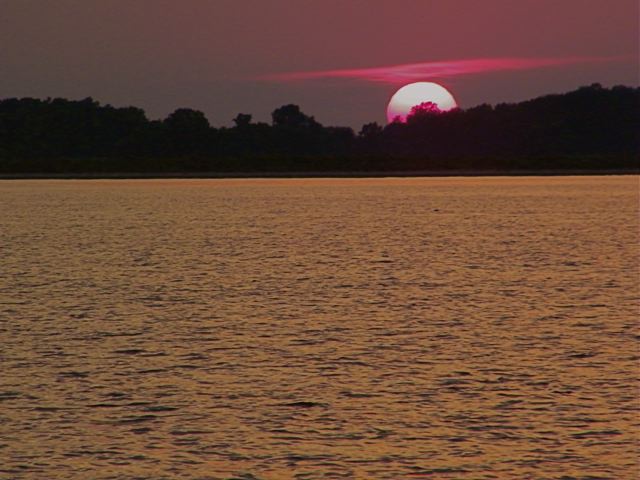 As the Earth Spins

The Maggie’s deck was laid with two Oriental rugs. Tables were laid with food. Jean supplies some of it and guests bring some. Thumper pilots the Maggie from her berth up the creek and brings her to the public dock for us to board. 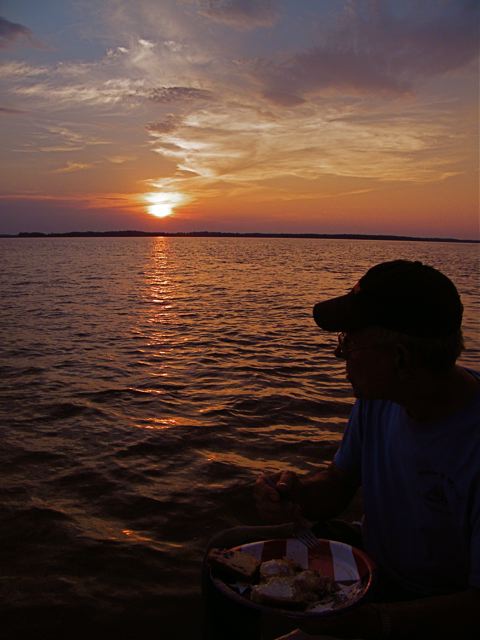 Crew Looks to the West

At dock in the creek, we have to climb down a ladder (just a household four-step ladder that you would stand on to paint the walls or hang the flag from the porch roof beam) folded and leaning steeply against the gunwale and dock piling — you climb down frontwards, placing your feet on the back edge of the treads of the closed ladder, with two crew members, one on each side of you, firmly holding your hands, supporting you over the foot of black water space between the dock and the boat. 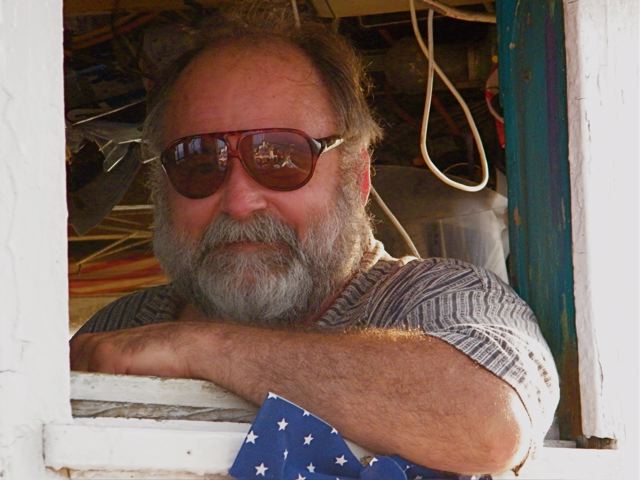 In order for Maggie’s five-foot draft to make it through the cut from the creek to the bay, we have to start as the tide is coming in and then return at high tide. The cut is silted in because new high-roller residents have built houses and dumped more sand on the beach. 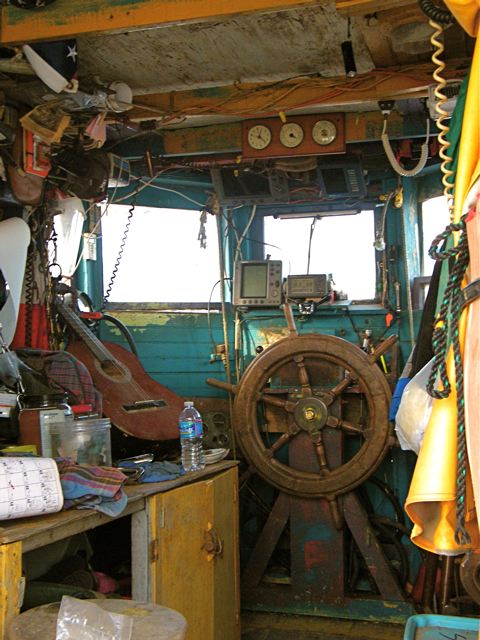 After we ate and watched the fireworks two of the guys, members of Delmarva Friends of Folk, sat at the bow, played their guitars and sang the blues for us. There in the dark, a light breeze came up and a shoal of black mackerel clouds etched in silver light traveled across the full moon. 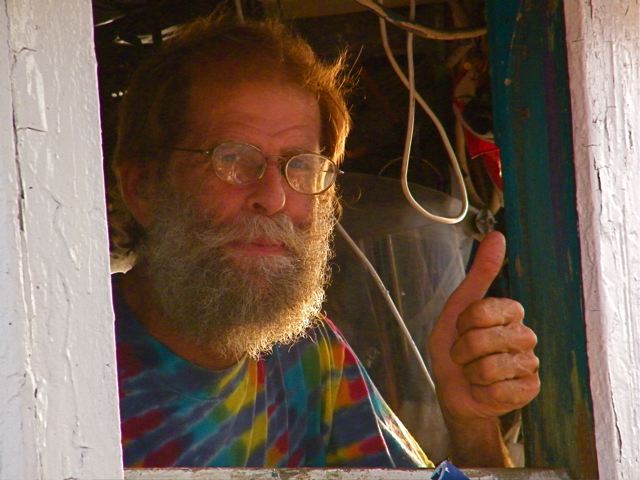 We were under sail much of the time, but barely moved since there was little breeze. Thumper used the engine to move us around. 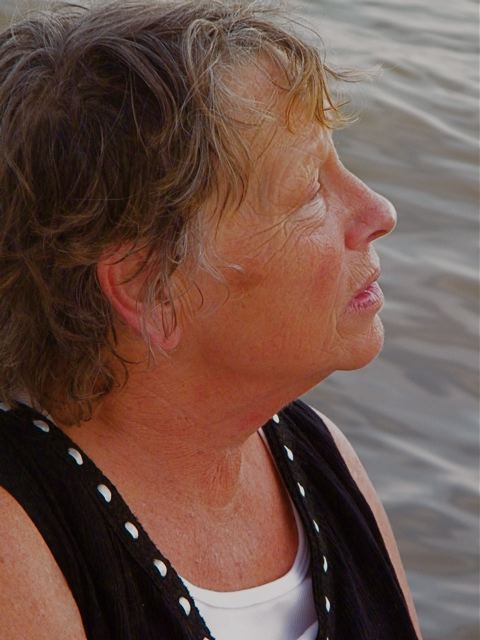 At the end of the evening, back at dock, we jumped down about three feet onto land. Crewmembers once again held both our hands to steady us. 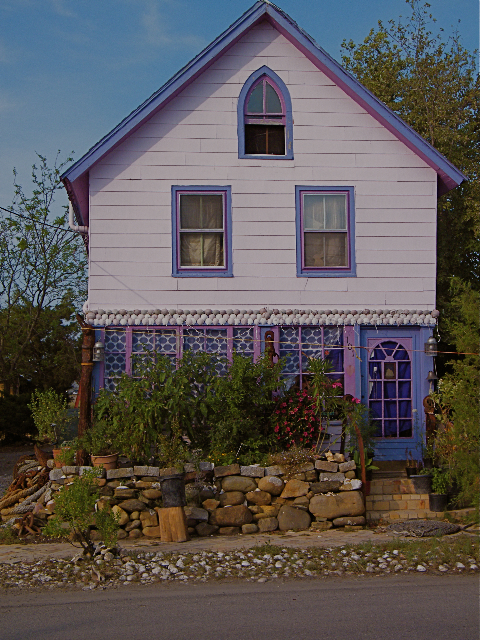 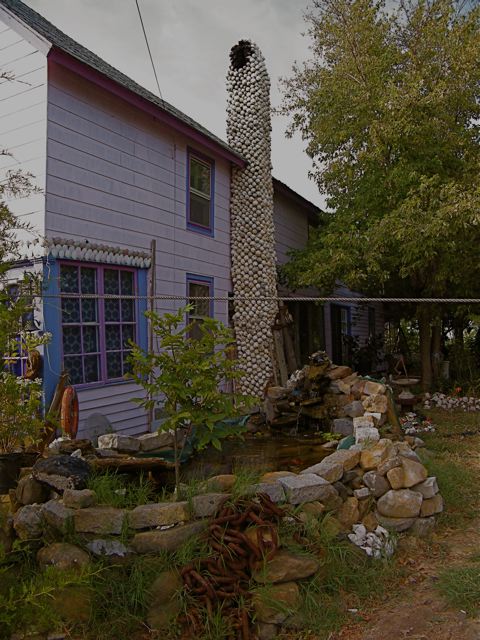 The Conch Chimney That Thumper Built

We never did find the apple pie, however, that the friends I rode with brought and carried aboard. 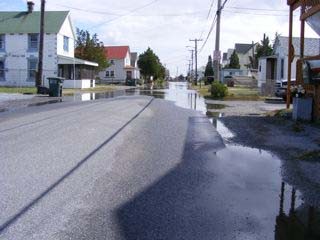 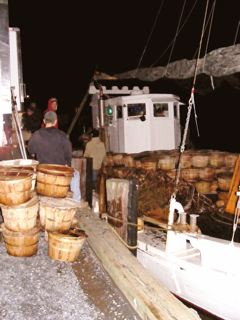 At the End of the Day Working Maggie Unloading Blue Crabs