XCVI. It Came Upon a Night So Clear

We stood shivering in the dark on the dock of the Murderkill Creek as we watched the lights on the top of the Bay float slowly, slowly towards us. It was 6:30 on the evening of December 16, 2004. The historic oyster schooner, the Maggie S. Myers, with her newly restored mast and sails, was making her way into the cut at Bowers Beach, Delaware. The tide was so low that her captain, Frank “Thumper” Eicherly IV, had to cross the bar from the Delaware Bay to the creek at almost a standstill because the Maggie’s bottom was scraping the sand here and there. At 6:45 she tied up at the public dock.

“Oh! She’s beautiful!” we all exclaimed. We were friends and family of Thumper and his wife, Jean Friend, the Maggie’s proud owners. The Maggie had been to the rail to get her sails back and we had gathered to welcome her home. “She’s so awesome!” exuded Jean’s mom, Dot, 82, visiting for the holidays from New Hampshire. “Oh, she’s beautiful!” each of us said again, in turn.

Indeed, she was beautiful with her white-painted, fifty-foot yellow-pine mast and her colorful sail Thumper had sewn, and jib riggings. She looked like the boat she was born to be. She was once again: The Maggie.

Our gathering went back to Jean’s and Thumper’s house a few blocks away, the one with the chimney Thumper built from conch shells. The long table was laid with soup Jean made and bread the guests brought. Thumper said the blessing, and after we ate, he played his guitar and sang a song. Then Dot played the piano; Sadie, Thumper’s old dog, leaned against the wood stove; and a cat jumped onto the table and almost lit her tail in the candle flames.

The Maggie S. Myers, was built by Rice Brothers boatyard in Bridgeton, N.J., as a Delaware Bay dredge schooner and commissioned in 1893. She is the twenty-second boat to get a New Jersey oyster license. She has never been out of commission. She is fifty feet long, eighteen feet wide, drafts five feet and weighs 24.62 gross tons. “She can carry her weight in oysters,” said Thumper.

In the 1940s, like most oyster schooners of the day, her masts were cut and she was motorized.

“Maggie had two masts, sails, and probably some very large oars in case the wind didn’t blow,” Thumper went on. “Maggie is thick-skinned, beefy. Her wooden hull is six inches thick. She won’t get crushed by ice like some boats. In fact, on cold winter days she cuts through the ice in the bay.”

The Maggie was not always a part of Thumper’s and Jean’s lives. They rescued her from the brink of scuttling in 1998 when her owner could no longer afford her annual tens of thousands of dollars upkeep. The owner sold the Maggie to Thumper and Jean for five thousand dollars.

“The instant we saw her, it was love at first sight,” said Jean.

“She looks so cool,” Thumper observed. “She’s low to the water and dredges by hand. She turns on a song, like a snow goose flying around in the air.”

Today, with her sails restored, the Maggie is believed to be the oldest continuously working oyster schooner under sail in the United States. She is listed on the National Historic Register.

She is the little schooner that could.

For me it was love at first sight, too.

The Gift of Candlelight on the Snow

A few nights after the Maggie came home with her new mast and sail, many of our gathering were back in Bowers, this time to attend the Candlelight Christmas Carol Service at the little wooden historic Saxton United Methodist Church, which Jean and her friend Lonnie Field had recently restored, where Thumper, who taught Sunday school there, played his guitar, accompanying the organist, and sang two hymns.

All Creation sang for joy, making offerings and gifts, and as we sang the song of the angels—“Angels We Have Heard on High”—the angels must have heard, for it seemed they had come in. A member of the congregation read an abridged O. Henry’s “The Gift of the Magi.” Outside it began to snow. We sang “Silent Night,” and in the candlelight, through the gothic church windows I watched the virginal white flakes journey slowly, peacefully, soundlessly towards earth—some alone, some in gatherings. Following the service, women of the church served hot apple cider and homemade cookies.

Then we went back to the house. Jean served vegetarian lasagna and oyster stew made with oysters Thumper had just dredged. It snowed throughout the evening and driving home was difficult, but we made it.

I excerpted parts of this story from one I published in James Milton Hanna’s  Delaware Bay Stories, Past & Present, published by Cherokee Books, 2008. 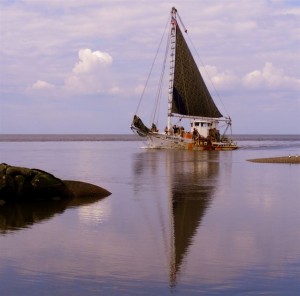