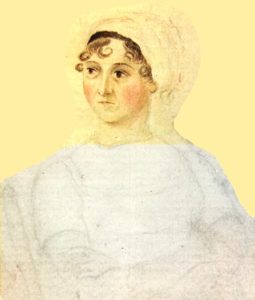 Jane Austen lived and wrote during the Regency era; she was not a Victorian, as some suppose. The Regency era was brief. It began in 1811 when the emerging madness of Britain’s King George III deemed him unfit to rule – though American Patriots had declared him unfit years earlier – and his son George IV became Prince Regent. The Regency era ended in 1820 when George III died and George IV acceded to the throne. Some stretch the era to include the reigns of George III, George IV and his brother William IV, extending from 1795 until 1837 when Victoria, granddaughter of George III, became queen.

While all this was going on, Jane Austen was writing. She wrote, most often by a window for the light, on four-by-seven inch paper, on her writing box. Inside the box she kept her paper, inkwell and quills.

She edited her work by sentence first, blotting and crossing out, and then went back and edited the piece as a whole. She did not trouble herself with perfecting grammar or punctuation, these later corrected by her editor, yet she was an experimental and innovative writer, employing a sharp wit in writing dialogue and conversation. She wrote with delightful economy and precise narration. Jane Austen is considered one of the greatest English novelists. Her genius in attention to form has been compared to that of James Joyce. Her form can be related to that of rubato in music whereby the tempo retards and then accelerates and catches up within a defined few measures, without losing the overall pace. By these means, she guided her reader through the story with clarity.

Jane Austen loved music. “Without music,” she wrote in Emma, “life would be a blank to me.” She played piano and practiced daily before breakfast so as not to interrupt her family’s daily routines. Among her extensive sheet music collection, her favorites were songs that told a story. Accordingly, she features pianos and singing in her stories, and many of her characters are musicians.

In her lifetime, 1775-1817, Jane Austen completed six novels, among her other writings, two of which, Northanger Abbey and Persuasion, were published posthumously. Initially, she published all of her works anonymously. In the 1817 publication of these last two novels, her brother Henry wrote a eulogy identifying Jane Austen as the author.

Jane Austen lived her life in the shadow of war, from the American Revolution through the War of 1812. The relationship between war and society permeates all her novels but Emma. Here is a bit of gossip about amusing goings on paralleling Jane Austen’s lifetime: In 1812, she was writing Pride and Prejudice. Indeed, she published her first four novels during the War of 1812, and in three of those stories “they could talk of nothing but officers” in their red coats (Pride and Prejudice). Her brothers Francis and Charles were home from sea that year. In 1815, the Duke of Wellington defeated Napoleon Bonaparte at Waterloo, two years before Jane Austen died. Ludwig von Beethoven was composing in his middle period then. Franz Schubert had written many lieder (songs) and published his first, Erlafsee – as a free insert in an art and nature lovers almanac –, and in the summer of 1817 composed his first six piano sonatas, all published after his death in 1828. In the summer of 1816, Mary Godwin and her future husband Percy Bysshe Shelley were up on Lake Geneva visiting Lord Byron. Mind you, Lord Byron had by now quit his 1812 affair with the future Queen Victoria’s Lord Melbourne’s wife, Lady Caroline Lamb. The summer proved wet and dreary and Byron proposed they each write a ghost story. It is where Mary Shelley conceived of Frankenstein. The following May, 1817, Mary Shelley finished writing Frankenstein; or, The Modern Prometheus. The novel was published on January 1, 1818. Jane Austen wrote her novel Northanger Abbey as a parody of the Gothic novels popular in her time, three in particular: The Monk: A Romance, by Matthew Gregory Lewis, published in 1796; and two by Mrs. Ann Radcliffe, The Romance of the Forest, 1791, and The Mysteries of Udolpho, 1794. These books remain in print today. Ann Radcliffe is considered the founder of the Gothic literature genre. A movie, The Monk, was released in 2013, based on Matthew Lewis’s Gothic thriller. During the years 1794-1799, Jane Austen was drafting her novels, Lady Susan; Elinor and Marianne, an early version of Sense and Sensibility, written in epistolary form; First Impressions, the original version of Pride and Prejudice; and Northanger Abbey. She was at work on Sanditon in 1817 when she died.

While Jane Austen was in the country writing her early works, Thomas Jefferson was at Monticello cooking. He specified, in a recipe surviving in his own hand, an ingredient for his macaroni as “2 wine glasses of milk.” English ladies in Jefferson’s day wouldn’t eat macaroni for lunch. Until the Regency era, English ladies did not eat lunch. They ate a light fare of bread and cheese and maybe a salad. Salads did not contain tomatoes, because back then the English did not eat tomatoes raw. Salads commonly contained cucumbers and nasturtium flowers, lettuces, often fowl, such as pigeon, as well as anchovies and eggs. Luncheon was introduced during the Regency era, but for ladies only, and then usually with friends. At our Jane Austen Readings and Luncheon at the Smyrna Opera House, we chose not to serve pigeon – mainly because the Opera House Guild volunteers declined to go out and shoot them – but certainly we serve croissants, because, well, why not indulge…? The English didn’t eat croissants in those days yet groused upon their return from France about the bland English breads and rolls. The English consumed a lot of butter. It is said that croissants originated in Turkey and Austria and Marie Antoinette brought them to France when she married Louis XVI. It may be, then, that Marie Antoinette was misquoted about the cake, but rather she proclaimed, “Let them eat croissants!” We imagine that given a choice, Jane Austen would have preferred eating a croissant to a bland roll.