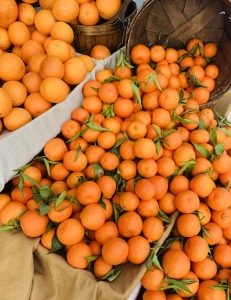 The orange is a hybrid of the pomelo and the mandarin. It originated around 314 B.C. in the region comprising southern China, northeast India and Myanmar and traveled to Europe with the Moors. Oranges come in many varieties. Here are the most common.

The Navel orange is a low acid, sweet, large orange. It is seedless and generally easy to peel, easier if it comes from California rather than Florida. The Navel orange season runs from November to January in Florida and in California from January to March.

The Hamlin orange is a nice sweet little Florida orange, somewhat oval in shape and great for juice. The Hamlin orange has a few seeds, though not many. It does not peel easily. Therefore, most people prefer it for juicing rather than eating. Hamlin season is November to January.

Contrary to popular belief, the Florida Pineapple orange is not part pineapple. It does have almost yellow flesh—very light orange—and is very sweet and juicy, like a pineapple. It’s slightly larger and rounder than the Hamlin and is riddled with seeds. It’s not easy to peel. It is considered a juice orange. 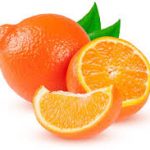 The Minneola tangelo is generally large and bell-shaped, with a small knob on the top (but not always—some are round and quite small), deep orange in color and seedless. Its thick skin makes it easy to peel, and it is super sweet and juicy, especially the Florida Minneola—one fruit makes a whole glass of juice. So, Floridians call them Honeybells. They have a very short season (January in Florida, later in California) and the trees do not always produce well, so they are more expensive than most other citrus. A tangelo is a cross between a grapefruit (hence the bell shape) and a tangerine.

A tangerine is a mandarin-like citrus; that is, generally with a thin easy-peel skin (zipper fruit) and often seedless, depending on the variety. The name comes from, as you might guess, Tangier, Morocco.

The Satsuma is a mandarin, originating in Japan, typically seedless, easy to peel, sweet and juicy. A must-buy for October to December holiday treats.