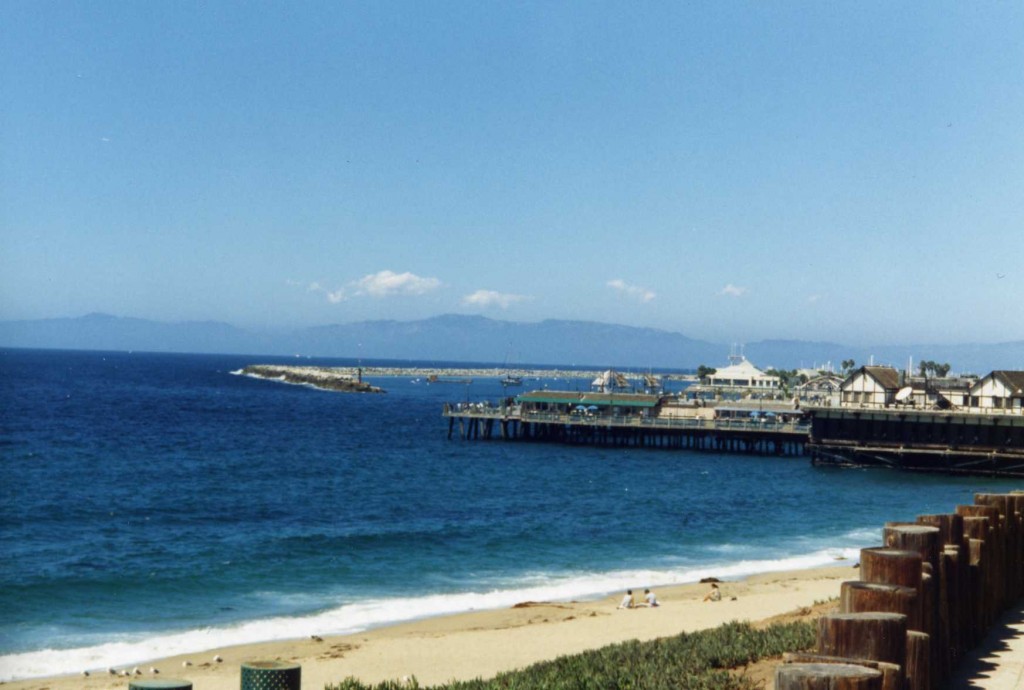 There are the Santa Monica Mountains, across the Santa Monica Bay, in the background. This place still feels like home to me. I lived in Redondo Beach, Calif., most of my adult life, for 30 years. It is where I raised my daughter. Over the years we lived there, we watched big Pacific storms wash ashore fishing boats permanently anchored out in the bay, and partially destroy earlier piers standing on wooden pilings; on the end of one pier was a dinner-house restaurant, Castagnola’s, washed over by huge waves.

In those years, Redondo served as the Port of Los Angeles. It was a bustling harbor where passenger trains and Henry Huntington’s Big Red Electric (trolley) Cars brought people to enjoy superb saltwater fishing, shops, restaurants, the world’s largest saltwater plunge and poking around in the mounds of moonstones on the beach. These natural mounds of gemstones are said to have been five to six feet deep and 40 to 50 feet wide. They’re not there now, and I’ve never been able to find out what became of them.

Back then, residents of inland cities such as Pasadena and Glendale summered in their beach bungalows lining the broad boulevards along the cliffs above the beach. The streets above Moonstone Beach where the Hotel Redondo stood bear the names of gemstones––Ruby, Diamond, Sapphire, Emerald, Beryl, Pearl, Garnet, Topaz, Carnelian…. The bungalows charmingly graced Catalina Avenue and Broadway when I first moved to Redondo. They disappeared in the 1980s when they were replaced by high-rise apartment buildings and condominiums.

Built on a bluff overlooking the Santa Monica Bay in 1889 with an 18-hole golf course, tennis courts, each of 225 rooms “touched by sunlight at some time of the day,” the $250,000 Hotel Redondo embraced sweeping views of the Santa Monica Mountains along the Malibu coastline to the north, the 1,000-foot altitude Palos Verdes Peninsula to the south, and the vermillion sunsets to the west.

Alas, the gods smiled on Redondo in a roundabout way, saving the city from becoming an industrial port and keeping it for the beach people, the upwardly mobile and for families and children: The grand, red-turreted Hotel Redondo was done in by Prohibition, razed in 1926 and sold for $300 for scrapwood. Its near twin, the historic Hotel del Coronado, built on Coronado Island off San Diego in 1888, continues to host guests in grand style.

During Prohibition, the gambling ship Rex operated three miles off shore. As the Redondo harbor declined, the San Pedro harbor bustled, and San Pedro became the Port of Los Angeles.

In the stead of the Hotel Redondo, today jutting out over the harbor, high over the waves in water as green and clear as an emerald, stands the bustling horseshoe-shaped Redondo Pier, with its restaurants and shops. Built in the early 1990s on concrete pilings, the present pier has outlasted its predecessors lost in El Niño storms every few years. 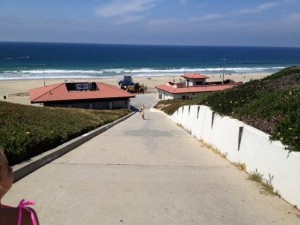 The ramp down to our beach when we lived in Redondo. (Kellie Child Soucek photo)

Weather in Redondo is sunny and in the 70s F nearly every day — except in June, when the “June gloom” sea mist rolls in and hangs around. The steady salt breeze off the ocean wafts aromas of ice plant (a succulent planted to keep the cliffs from sliding), sea urchins and Mexican food.

A brief history of the Redondo Pier

A brief history of the City of Redondo Beach — This paints a colorful picture of what Southern California was like before the throngs arrived in the 1950s and ’60s.

The land on which the City of Redondo thrives was once Rancho San Pedro, part of a land grant the California (Mexico) government gave to the Juan José Dominguez family in 1784.