What if you went to Yosemite Valley in Yosemite National Park and found the valley filled up with 300 feet of water?

It happened to Hetch Hetchy Valley in northwestern Yosemite National Park, the near twin to Yosemite Valley, a second glacier carved valley, a cathedral of granite cliffs and rushing waterfalls, a mere 20 miles away. In the early 1900s, after the 1906 San Francisco earthquake and subsequent fire, that city decided they needed access to more water. So, they got the United States Congress to legislate the Raker Act, building the O’Shaughnessy Dam to hold back the waters of the meandering Tuolomne River at the mouth of the valley by creating the Hetch Hetchy Reservoir. To fill the valley with water, they had to clear-cut stands of ancient trees; pristine waterfalls were buried beneath the rising reservoir waters, all the wild grasses (hetch hetchy is what the native people called these grasses), the wildflowers and the shrubs gone.

Proclaimed naturalist John Muir when he encountered the High Sierra, “As long as I live, I will ever after hear waterfalls and birds and winds sing. I’ll acquaint myself with the glaciers and wild gardens, and get as near to the heart of the world as I can.”

The ensuing love affair between man and nature saw Muir devote a lifetime to preserving the awesome wilderness he had found and to the birth of Yosemite National Park. Ah, but the fruits of Muir’s untiring devotion could not extend far enough into the political wilderness to save Hetch Hetchy. President Woodrow Wilson signed the Raker Act into law on December 19, 1913, and though John Muir continued the battle, he died, devastated, a year later. The Congress immediately recognized their tragic error. There had thus far existed no coherent policy for national park management. So that such a travesty would never happen again, Congress enacted the National Parks Service Act of 1916. Since then, ecological and engineering studies have found that there are more efficient sources of water for San Francisco, and including damming the Tuolumne at the western end of Hetch Hetchy rather than at the mouth of that valley; and that if the reservoir were slowly drained, within five years, as the Tuolumne reclaimed its original channel, native wildflowers and grasses would grow in the valley and wildlife would return. The bathtub ring would gradually disappear. In 100 years the valley would be completely restored. There is a grassroots movement on called Restore Hetch Hetchy, raising public funds towards the restoration.

I wanted to see Hetch Hetchy. So, while my friend Cheryl and I were visiting the Eastern High Sierra and Yosemite Valley in August 1992, we decided to drive over to the western slope of the Sierra and up through the Stanislaus National Forest to Hetch Hetchy.

We drove through Coulterville, a gold rush town where gold can still be found in the creeks. I took a photo of the historic Hotel Jeffery. 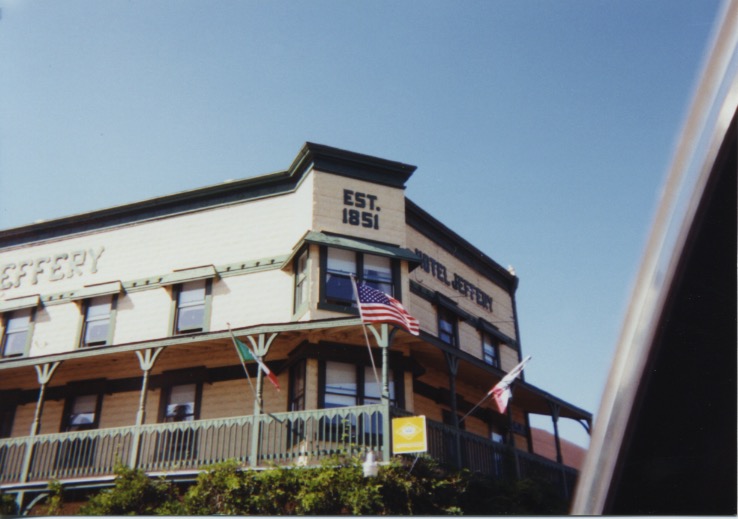 On November 12, 2014 a fire destroyed much of this hotel. It was the fourth fire in the Hotel Jeffery’s history, three occurring in the late 1800s. The hotel has since been restored and, from what I’ve read, apparently to better than before the fire — they exposed the original adobe walls and pulled up the carpets and sanded and polished the original floorboards.

When we traveled to Hetch Hetchy, a recent fire had burned much of the forest, so this is the landscape we encountered. 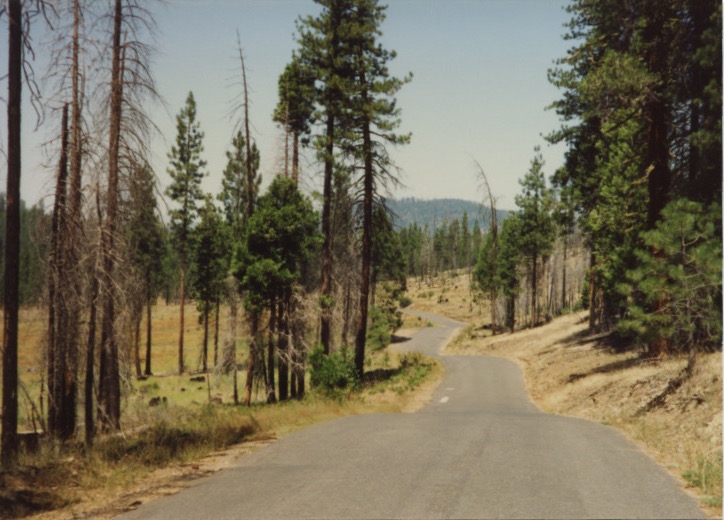 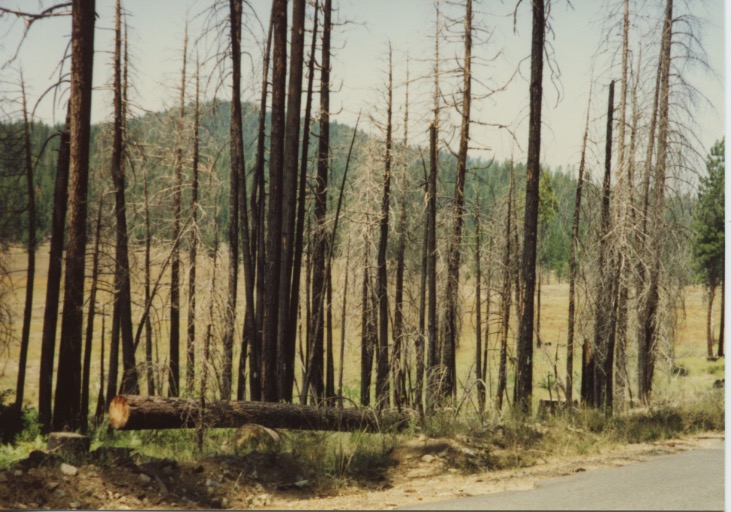 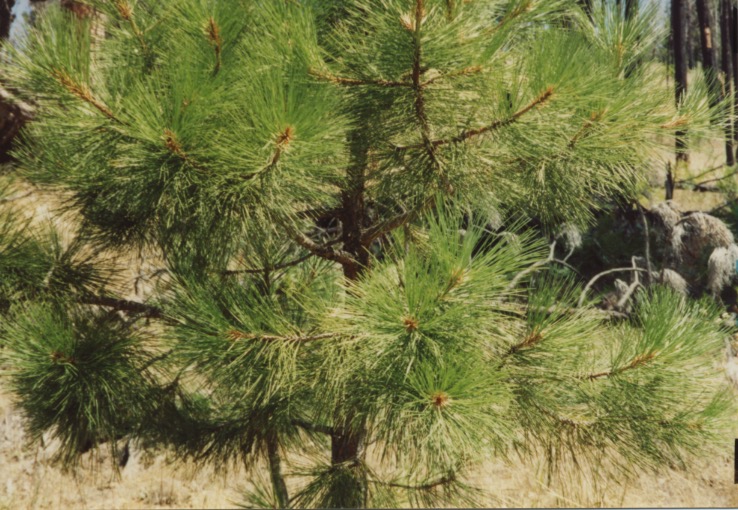 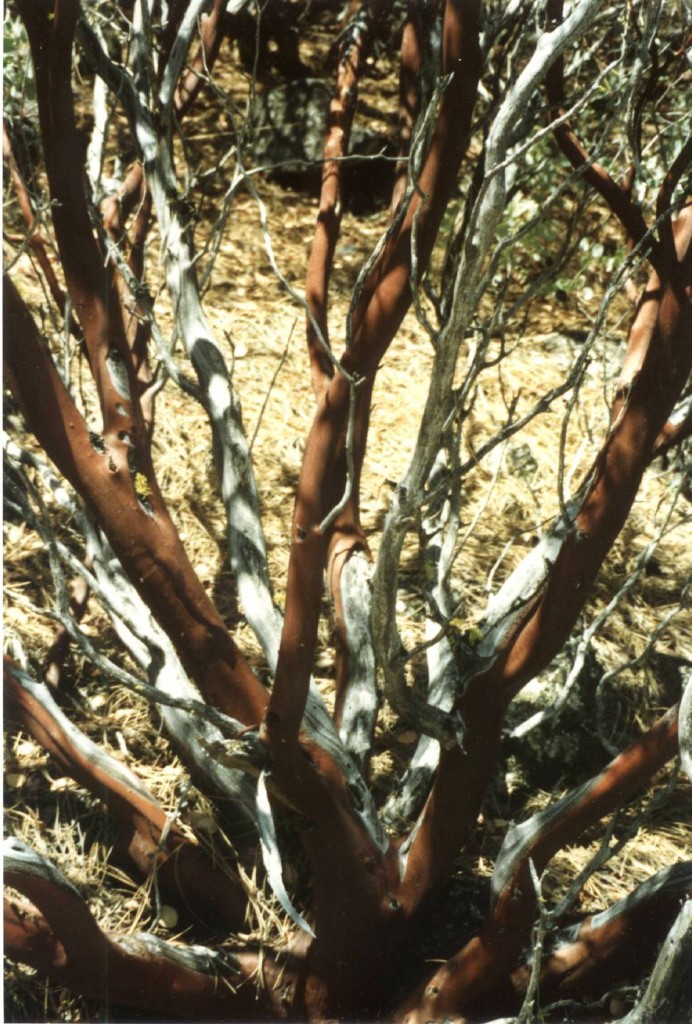 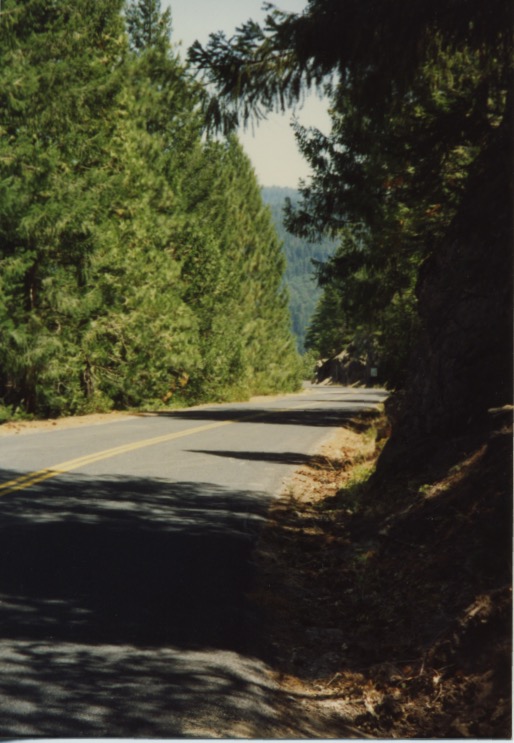 The road to Hetch Hetchy Valley.

There are ample other resources, other reservoirs, data shows, to supply San Francisco with water and hydroelectric power. Yet the city refuses the dismantling of the Hetch Hetchy Reservoir. The battle goes on. 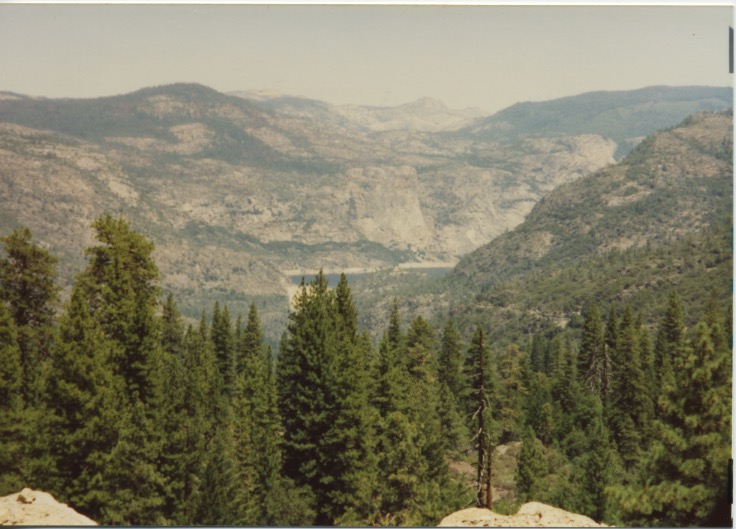 From this high point in the road you can see the Hetch Hetchy Reservoir. 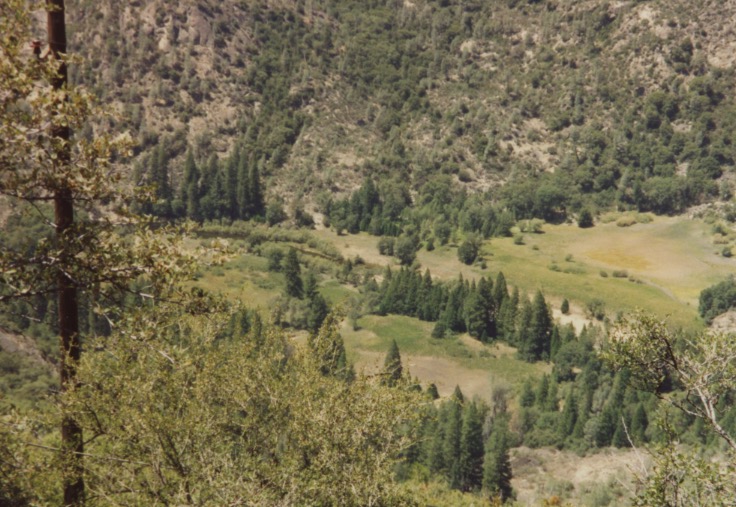 This is a view, above, of the Tuolomne River on its course below the dam. 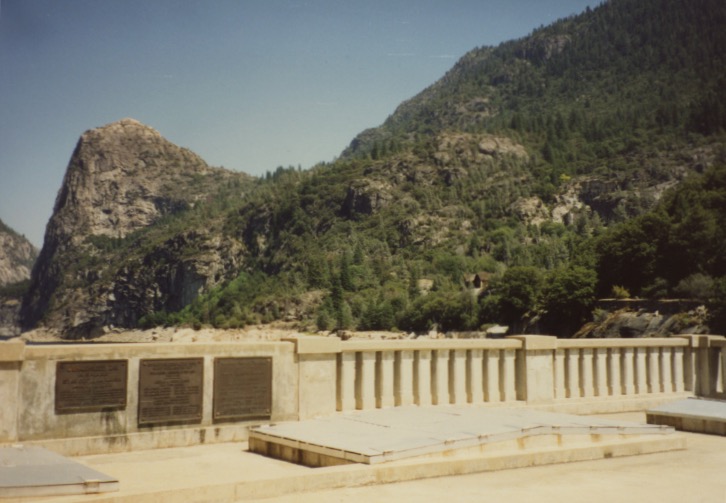 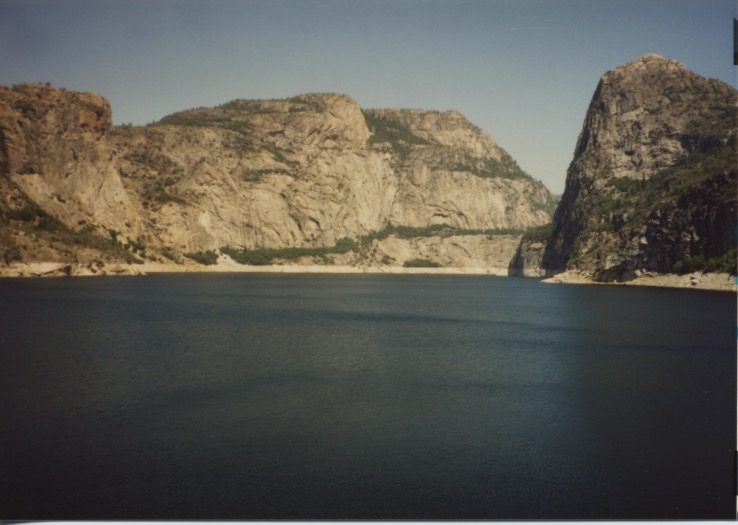 Hetch Hetchy Reservoir. Since we were visiting here in late summer, the waterfalls had dried up, as they do every year, except for the ones fed by living glaciers. 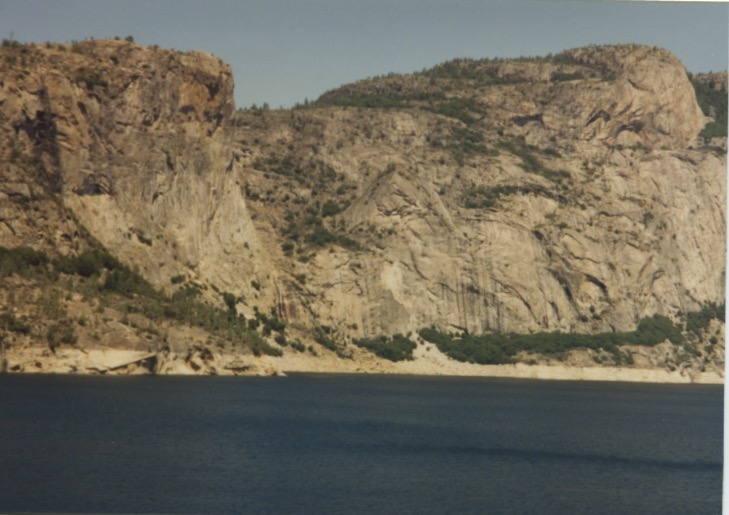 You can get an idea of the drama of nature that lies beneath this 300 feet of water, even waterfalls below the surface.

Here’s how Hetch Hetchy looked before the building of the O’Shaughnessy Dam. This, of course, is not my photo. I got the following photos from the Internet. 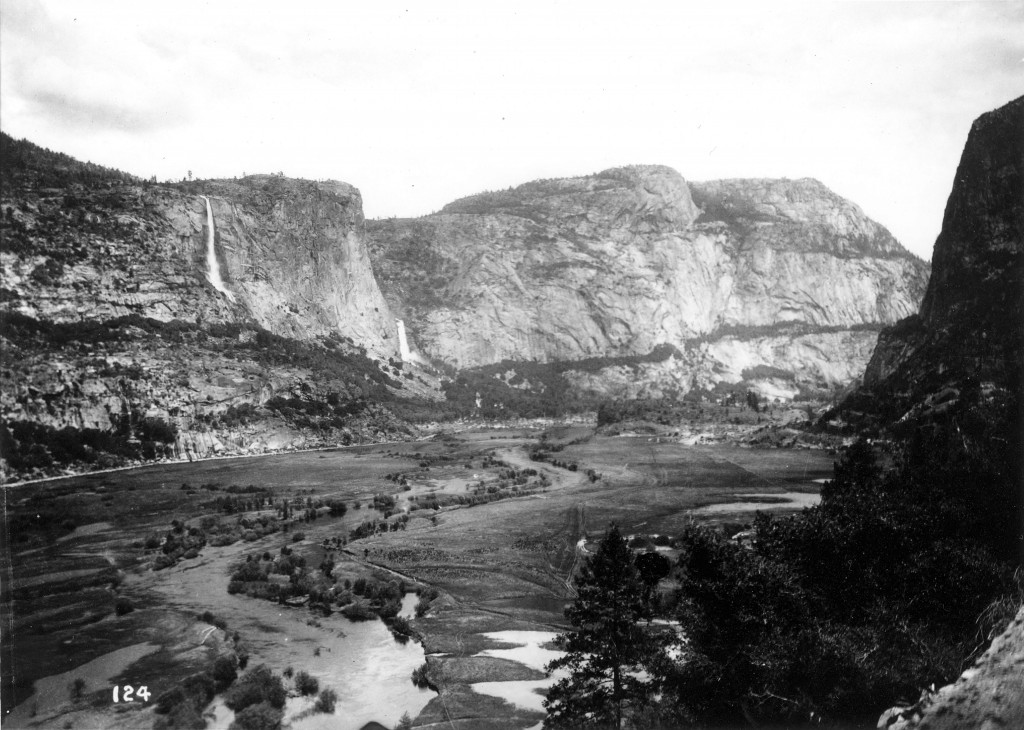 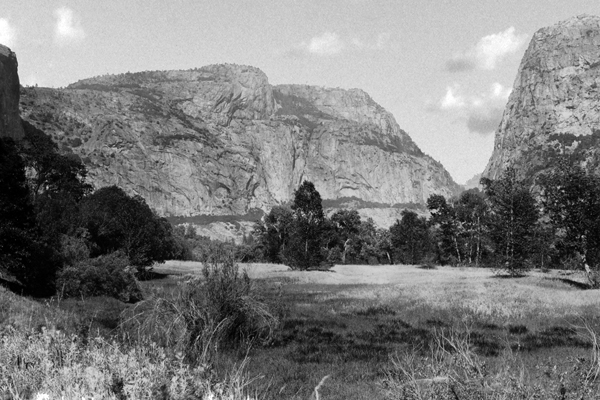 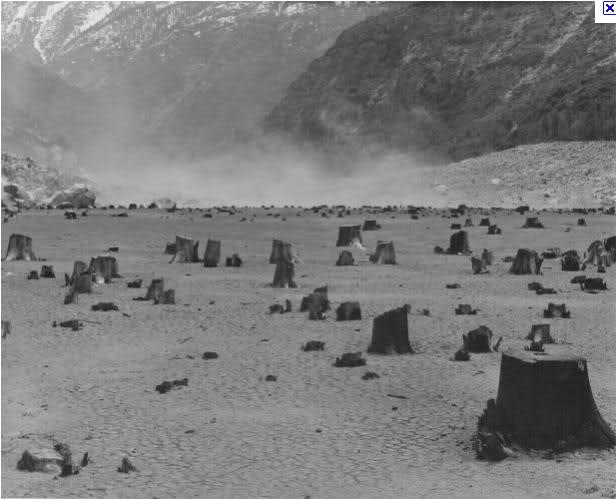 Here is the link to some short Restore Hetch Hetchy videos and a 21 minute one by Harrison Ford.