The Grand Canyon of the Colorado River bisects the Kaibab Plateau in northern Arizona. The north side of the plateau, part of the greater Colorado Plateau, has an elevation of up to 9.200 feet. The south side ranges in elevation from 8,800 down to 6,000 feet. Because the North Rim, itself, of the canyon is a thousand or so feet higher in altitude than the South Rim, the North Rim is colder and has more snow. My photos here are taken from the South Rim. I have not visited the North Rim. 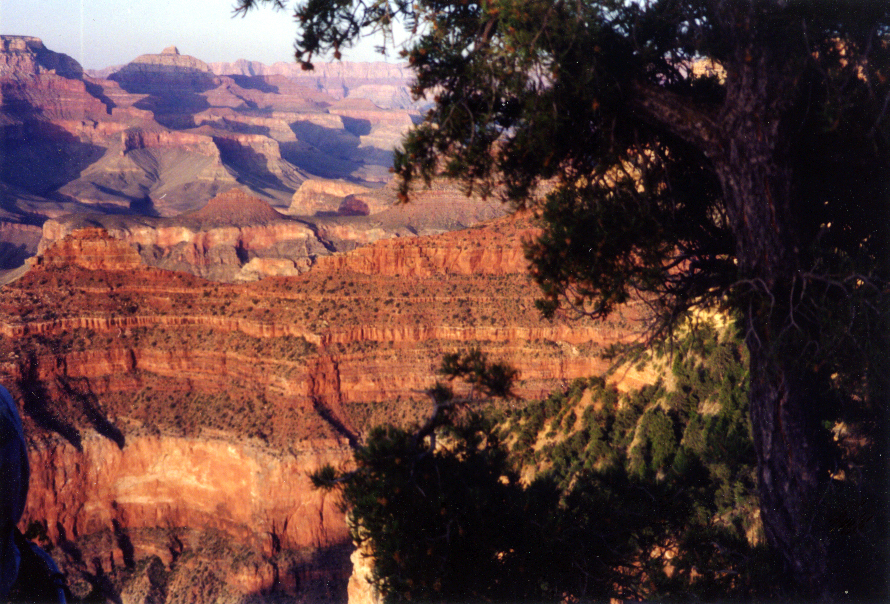 The Grand Canyon is more than one mile deep, 277 miles long, and up to 18 miles wide. The Colorado River falls 2,000 feet during its course through the canyon. Most first time visitors to the Grand Canyon stand speechless as they gaze out across the awesome vastness. The nearly 40 layers of sedimentary rock layers of sandstones, shales and limestones lay exposed like pages in an open book revealing a story of geological phenomena inscribed from 200 million to two billion years ago. It simplifies the story to say that the Grand Canyon was carved solely by the Colorado River; other geologic forces are involved, too, including movement of the earth’s tectonic plates, volcanic activity and wind erosion. 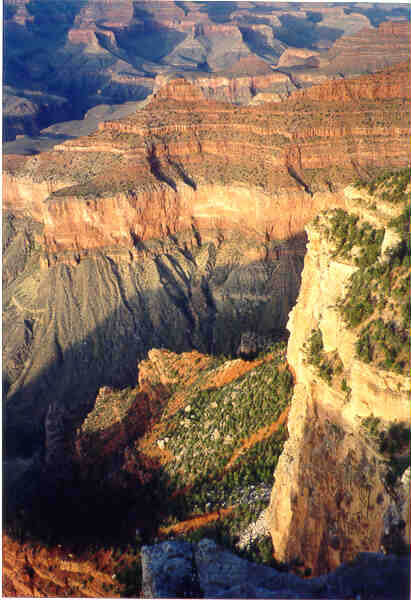 President Chester A. Arthur designated this land federal government property in 1882, effectively pulling the land out from under the Havasupai (the People of the Blue-Green Waters), all but 518 acres, who had existed on their land, the size of the state of Delaware, for eight centuries. The Havasupai have held strong bonds with the Hopi people, who live in close proximity.

President Gerald Ford returned much of the land to the Havasupai. Supai is the Havasupai city on the floor of the canyon. The town is home to about 500 tribe members, and the tribe charge tourists, required to make hotel and rooming reservations, to visit their land. 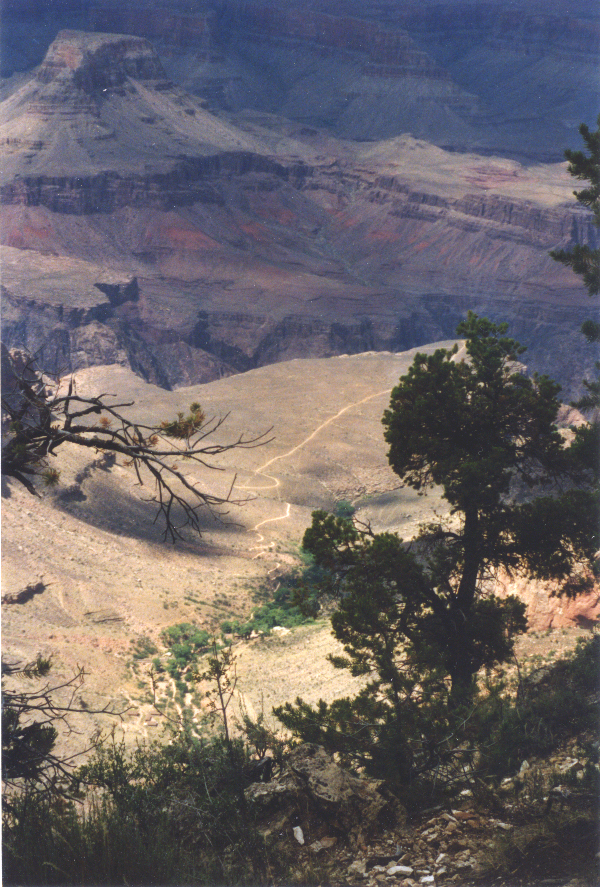 The Bright Angel Trail you see in the photo above, descends 4,380 feet, at a 10 percent grade, to the floor of the canyon. The highest point is 6,860 feet at the South Rim; the lowest point is 2,480 feet at the Colorado River. Follow the eight mile long, narrow trail by foot or by mule, from the South Rim down to the canyon and then another 1.9 miles to Phantom Ranch. Mules rather than horses carry you and your packs along the Bright Angel Trail because mules have calmer dispositions and are more sure footed. 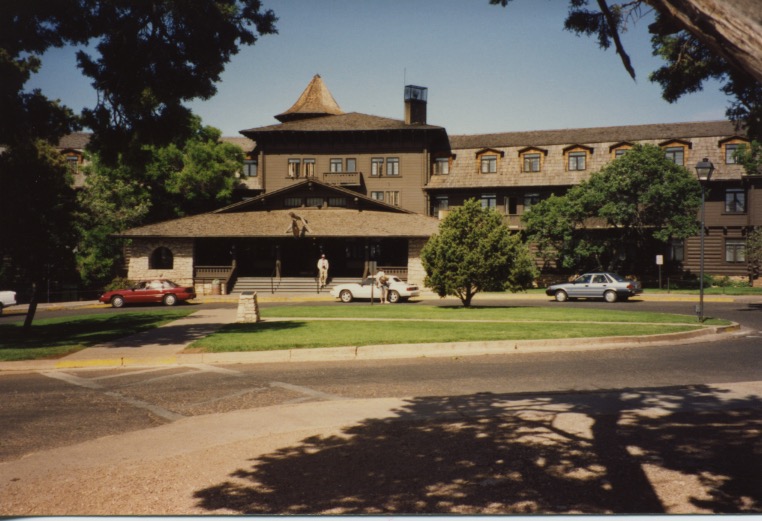 El Tovar, situated on the rim of the canyon, is a National Historic Landmark. Opening in 1905, the hotel had its own greenhouses growing herbs and flowers, poultry, cows and a butcher shop. Even today, although regulations do not permit husbandry within park boundaries, the hotel maintains sustainability, sourcing these products from just outside the park. El Tovar was once a part of a chain of hotels owned by the Fred Harvey Company in conjunction with the Santa Fe Railway. Such luminaries as Teddy Roosevelt, Albert Einstein, Western author Zane Grey, President Bill Clinton and Paul McCartney have stayed here. Teddy Roosevelt thought this location beautiful as it is, that no hotel ought to be built. He also told the Havasupai that this land was being designated a national park and that they would have to leave. I ate breakfast here with a Tahitian couple I escorted on their tour. To the waiter’s question, “How would you like your eggs?” the French-speaking wife replied, “Sur le plat.” 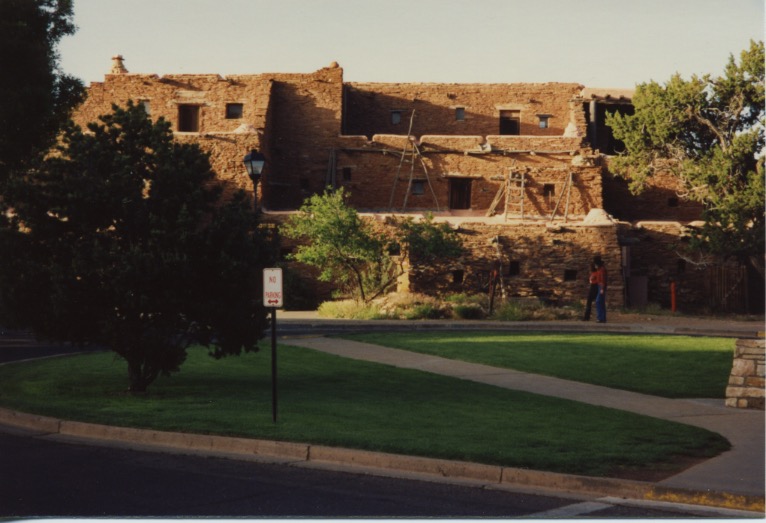 This picture above is of Hopi House, a gift concession featuring a large selection of Native American handicraft. Hopi House is a National Historic Landmark. The building, located on the South Rim of the Grand Canyon next to El Tovar, was designed by architect Mary Colter on the model of a Hopi dwelling and was completed on January 1, 1905.

And here is how I got to the Grand Canyon to take these photos. (And, no, Capt. Steve Smith is not looking for pennies on the ground. It’s a cold, windy day.) 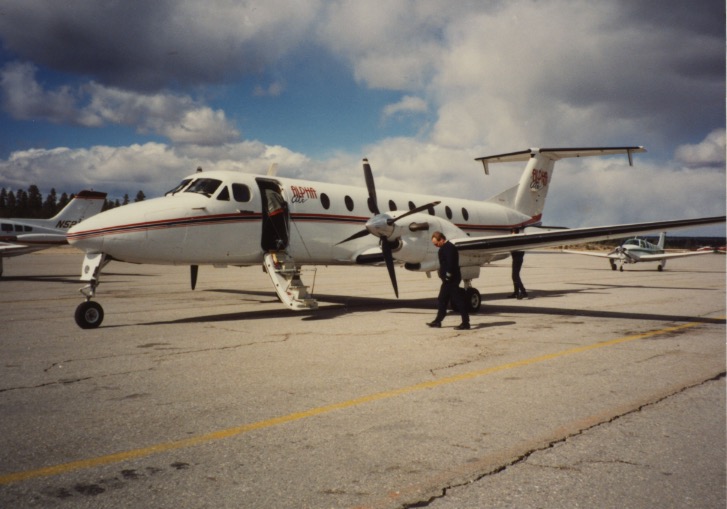