A Song to Maggie 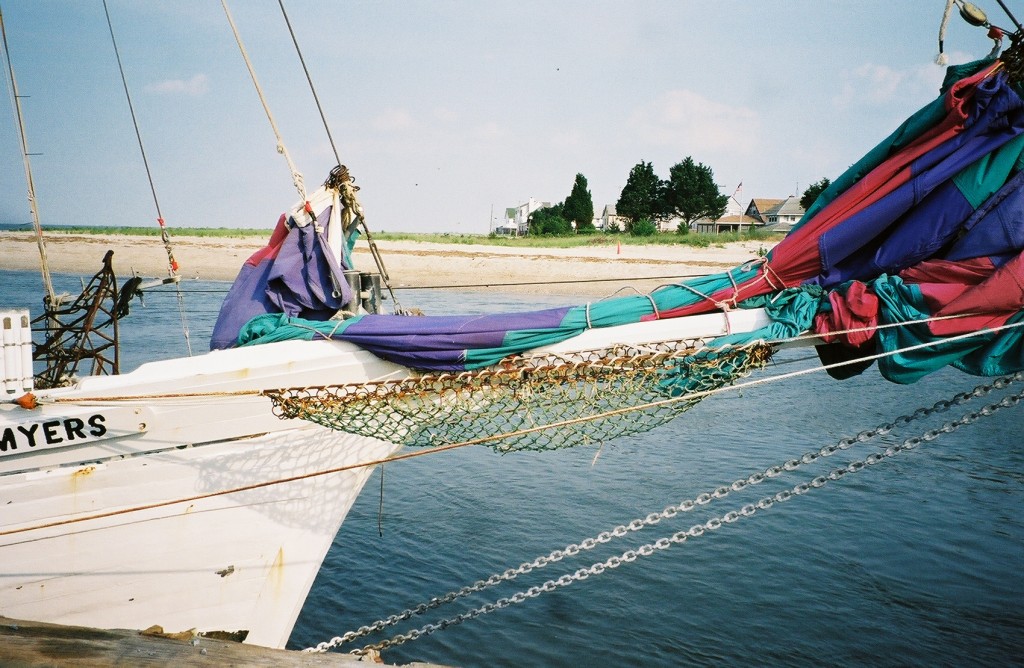 One day in 1998 – The weathered face of the old waterman standing alone on the beach, gazing out onto the dull, gray bay; an old wooden schooner, hull rotted with holes, lying on her side on the sand by the creek, gutted of her soul – her motor and masts: This could have been the fate of yet another wooden schooner, had not her new captain and his wife fallen in love with her at first sight and saved her the moment before the sun set upon her bow forever.

July 8, 2011 – I awoke this morning with a song to the Maggie in my mind. The Maggie is a 118-year-old Delaware Bay oyster schooner, the Maggie S. Myers, owned for 13 years by my good friends Jean and Thumper. The Maggie is believed to be the oldest continuously working oyster schooner under sail in the United States. She has never been out of commission. Thumper sails her out of Bowers Beach, Delaware, onto the Delaware Bay nearly every day where he and his crew of two or three or more work her dredging for conch, oysters (when ever-tightening regulations permit), blue crabs and more. A few years ago, Jean and Thumper restored one of the Maggie’s two masts; Thumper sews his own sails. Thumper often works her under sail, thus saving fuel. The Maggie is 50 feet long and 18 feet wide with a five-foot draft. She sits low in the water like a fat white goose.

For the evening of July 3, Jean and Thumper invited a group of us out on the Maggie to watch the Bowers Beach fireworks from the bay. For this annual event, Jean lays a seasoned red Oriental rug across the Maggie’s deck and spreads the workbench with a lace tablecloth. Jean, a vegetarian (as is Thumper), has traditionally prepared the food for these events to which we are so honored to be invited; but this year she had it catered by the same guy who catered the food for the Green Eggs & Sand (a curriculum teaching teachers to teach kids about horseshoe crabs) 10th anniversary celebration in May 2010, where he prepared the cedar-plank grilled salmon, among other amazing dishes. The fare this year was equally as dazzling. Delicious. I’m so glad I went.

I am so glad I went not only because of the food but also because of the camaraderie, the friends onboard who have dedicated their lives to humanitarian achievements. I, among them, am the bumbling writer who writes to let the world know about the better place these leading exemplars create for humans, animals and the environment. There are Thumper and Jean: Jean buys and prepares the meals for a periodic series of soup kitchens for low-income watermen and others; she rescues cats (mostly dumped on her doorstep or in the marshes). Thumper created an innovative bait bag whereby he could use a quarter or less horseshoe crab for bait rather than using a whole crab; now he no longer uses horseshoe crabs; he uses mussels. Gary won awards for his Green Eggs & Sand curriculum. 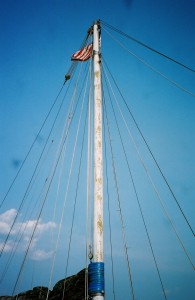 Maggie’s 50-foot mast
Glenn travels the world advocating for horseshoe crabs (ERDG, horseshoecrab.org – see the left sidebar with my list of friends and nonprofits); Glenn is also a Tibetan Buddhist Rinpoche. Glenn’s wife Mariko has family in Japan affected by the recent disaster (see the Tomodachi Project in the left sidebar); Glenn and Mariko’s daughter, Julia, is an extraordinary textile artist; and Glenn’s mom (who was not on the Maggie this night, is an acclaimed watercolorist and Sumi-e artist). Thumper plays the guitar, writes songs and performs these and sea chanteys, often playing for funerals. Another friend, who could not be there this night, Michael Oates, is an Emmy-winning independent documentary filmmaker, of 302 Stories. His PBS horseshoe crab documentary “Dollars in the Sand” was the progenitor of “Green Eggs & Sand.” Mike is an adjunct assistant professor at the University of Delaware and he and his partner, Jeanne, regularly engage in projects to help the less fortunate. Thumper and Jean have spent 13 years and hundreds of thousands of dollars restoring the Maggie: they fondly call this effort “The Maggie Myers Restoration Project.” Yes, Maggie must work to support herself. 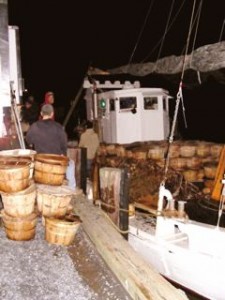 My friend, R., a most talented and versatile creative artist – he calls his painting technique sharp pointillism – (Assemblage 333 in the left sidebar) drove me to the Maggie, while a Hospice volunteer drove to my house in her Prius to stay with Emma. Kindle in hand, she was assured of having plenty to read while I was out on the bay.

I climbed down the ladder onto the Maggie’s deck. We waited at dock until the tide rushed into the creek enough to carry us through the cut where the Murderkill Creek meets the bay. While we relaxed out on the bay, the tide rushed in, rushed in so fast that when we returned to dock and Thumper was backing the Maggie into her berth, he had difficulty going against the tide: “She only backs up at six knots,” he said. But, Thumper’s a skilled captain, the Maggie did her best, and we made it.

Out on the bay, Thumper’s crew raised the main and jib sails. We ate, chatted, and Thumper got out his guitar, sat among us and sang us a beautiful song, one he did not write, “let me flow like the river” went the words. People had set two huge bonfires along the Bowers beach. Platoons of torches lit the yards of several big beach houses. The fireworks were unique one to the next and extraordinarily beautiful for a small town budget, and they lasted a long time. Someone lit a Chinese lantern or two or three and set them off. Then they set off more. Then hosts of them with their orange flames floated in the black night over the bay above us, like spirits floating across the sky.

If you are interested in the Maggie and the waterman’s life, I think you will like reading the story I wrote for the Spring 2009 issue of Delmarva Quarterly, “The Low Whistle of the Wind.” Find it here under the menu heading “The Ocean Bar and Seaview Grill.”